Smog Veil Records announces the Cleveland Confidential Book Tour returns to the road in April, with a stop at Quimby’s in Chicago on April 2.  The tour features three author-musicians also from Cleveland, Ohio including Cheetah Chrome (Rocket From The Tombs, Dead Boys, Batusis), Mike Hudson (The Pagans) and Bob Pfeifer (Human Switchboard, Tabby Chinos, former Senior Vice President A&R/Epic/Sony Records and President of Hollywood Records). Each will read excerpts from their book, answer questions from the audience and discuss their books and careers with each other. Authors will be available to sign books at each appearance. 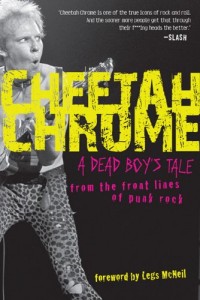 Cheetah Chrome – A Dead Boy’s Tale From The Front Lines Of Punk Rock is the no-holds-barred autobiography of Cheetah Chrome, lead guitarist of the Dead Boys, one of the greatest punk bands ever. It’s a tale of success and excess—amazing music, legendary antics, epic drug use, and eventual resurrection—that only a true rock and roller could deliver. As a songwriter Chrome’s work has been covered by artists such as Guns n Roses, Pearl Jam and the Beastie Boys. He still performs and records with Rocket From The Tombs and Batusis (with Sylvain Sylvain of the New York Dolls). He lives in Nashville with his wife and son.

Mike Hudson will read from Jetsam and Diary of a 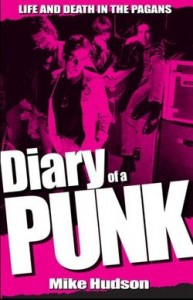 Punk. The 32 short pieces that make up Jetsam were written and published between 1977 and 2009. His lean and unsentimental prose style is apparent in even the earliest entries here. Diary of A Punk is Hudson’s autobiography. He is the founder of the seminal American punk rock group, the Pagans, formed in 1977. His work has appeared in Hustler, the Associated Press, Master Detective, Field & Stream and many other publications here and abroad. He is currently the founding editor and CEO of the Niagara Falls Reporter, a New York tabloid specializing in politics and organized crime. 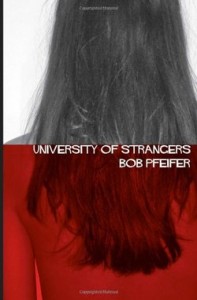 University of Strangers is Bob Pfeifer’s first novel. In a sensational case that made headlines all over the globe, the American student Amanda Knox was convicted of the murder of her British roommate Meredith Kercher, in what Italian authorities described as a sadistic sexual encounter. Pfeifer’s novel details the efforts of a secret society, comprised of famous contemporary figures from the worlds of literature, show business and politics, to clear the girl’s name. A unique blend of fact and fiction the book is a spellbinding account of the violence, corruption and celebrity worship that characterize much of 21st century life. Pfeifer was Senior Vice President A&R/Epic/Sony Records and President of Hollywood Records. Artists he’s worked with include Alice Cooper, Ornette Coleman, The Screaming Trees, also soundtracks like the Crow: City of Angels and Lion King. He is a founding member/songwriter of Human Switchboard and Tabby Chinos. He lives in Los Angeles with his son.