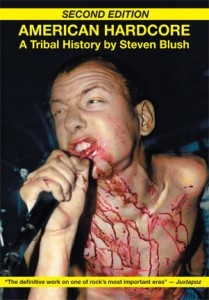 AMERICAN HARDCORE: A TRIBAL HISTORY was released in 2001 to great success.  The book is now in five languages, and led the way to the creation of the acclaimed documentary AMERICAN HARDCORE: The History of American Punk Rock 1980-1986.  With the resurgence of punk rock, and continued interest in the significant American DIY movement, Blush has expanded the book and into a second edition.

Author Steven Blush promoted hardcore shows in Washington D.C. in the early 80s. He moved to New York in 1986, and founded SECONDS Magazine, publishing 52 issues through the year 2000.  Blush has written three books on the subject of rock: AMERICAN HARDCORE: A Tribal History (2001, Feral House); AMERICAN HAIR METAL (2006, Feral House); and .45 DANGEROUS MINDS: The Most Intense Interviews From Seconds Magazine (2005, Creation Books).  His writing has appeared in publications including SPIN, Details, PAPER, Interview, Village Voice and The Times of London.  For twenty years he worked as a New York City club DJ and promoter, noted for his “Rock Candy” parties at Don Hill’s and sound designs for fashion pioneer Stephen Sprouse.