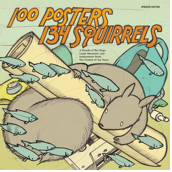 The work in 100 Posters/134 Squirrels is framed by essays from luminaries in the music, design, and poster worlds–including Steve Albini, Art Chantry, Greg Kot, and Debra Parr. This 2005 debut collection of Jay’s was praised by Chicago media and publications across the globe, including:

Since the release of that book, he has honed his craft continuing without the use of computers, and screen-printing the work in his shop called the Bird Machine for bands such as the Melvins, the Shins, Modest Mouse, Andrew Bird, Shellac, My Morning Jacket, and hundreds of others. His book, Animals and Objects In and Out of Water, features 120 of Jay Ryan’s favorite pieces of art from the last three years, including text about each of the prints, detail photos (shot at the  MCA in Chicago), and original drawings. 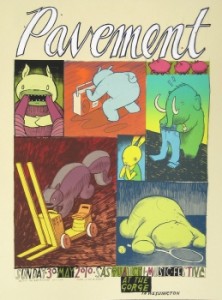