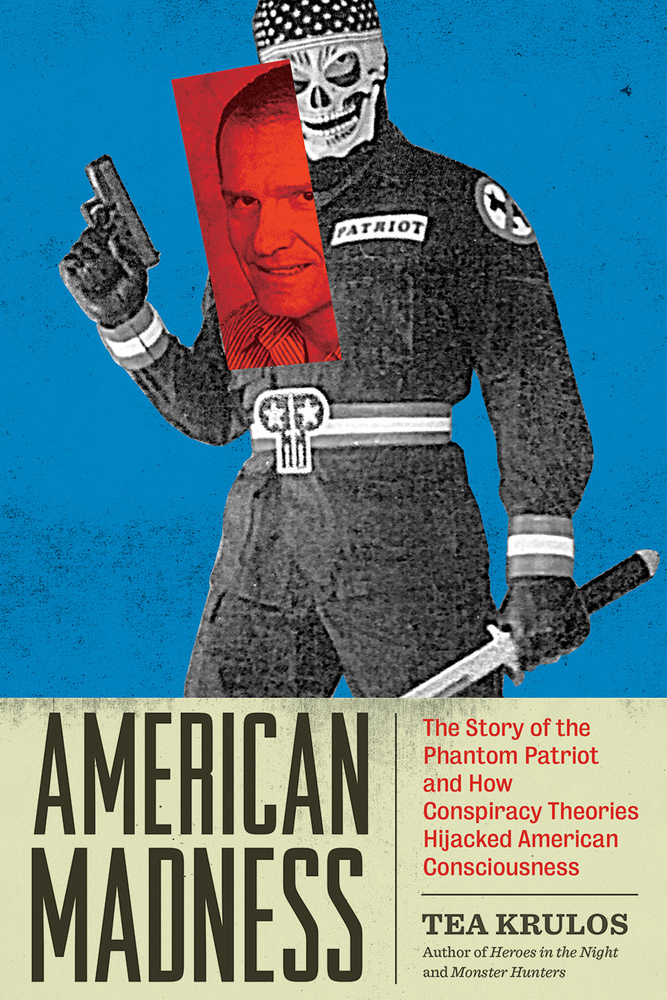 Q-Anon. Fake News. Bohemian Grove. False flag attacks. Deep state. Crisis actors. Whatever Gate. Is any conspiracy worth the life of a believer?

The mainstream news media struggles to understand the power of social media while conspiracy advocates, malicious political movements, and even foreign governments have long understood how to harness the power of fear and the fear of power into lucrative outlets for outrage and money. But what happens when the harbingers of “inside knowledge” go too far?

In American Madness: The Story of the Phantom Patriot and How Conspiracy Theories Hijacked American Consciousness (Feral House), author Tea Krulos tells the story of one man, Richard McCaslin, who’s fractured thinking made him the ideal consumer of even the most arcane of conspiracy theories. Acting on the daily rants of Alex Jones and his ilk, McCaslin takes matters into his own hands to stop the unseen powers behind the world’s disasters who congregate at conspiracy world’s Mecca- The Bohemian Grove. It all goes wrong with terrible consequences for the man who styled himself-The Phantom Patriot.

McCaslin is not alone, as conspiracy-driven political action has bubbled its way up from the margins of society to the White House. It’s no longer a lone deranged kook convinced of getting secret messages from a cereal box, now its slick videos and well-funded outrage campaigns ready to peddle the latest innuendos and lies in hopes of harnessing the chaos for political gain. What is the long term effect on people who believe these barely believable stories? Who benefits, and who pays the price?

Krulos investigates and explains the power of conspiracy and the resulting shared madness on the American psyche.

Tea Krulos is a Milwaukee-based writer who documents the underground world of fringe sub-cultures. His previous books, Apocalypse Any Day Now-Deep Underground with America’s Doomsday Preppers and Heroes in the Night-Inside the Real Life Super Hero Movement explored the driving beliefs and lives of the people who choose to reject accepted reality and substitute their own.

Join Tea Krulos on Quimby’s Bookstore’s You Tube Channel for an evening of discussion about this book, trivia, weird swag and more!

NOW FOR A LIMITED TIME: FOLKS WHO BUY THE BOOK WILL GET A LIMITED EDITION SUPPLEMENTAL ZINE AND SIGNED AUTHOR BOOKPLATE. WHILE SUPPLIES LAST. GET YOUR COPY HERE.

Watch this preview we did with Tea on Youtube!: 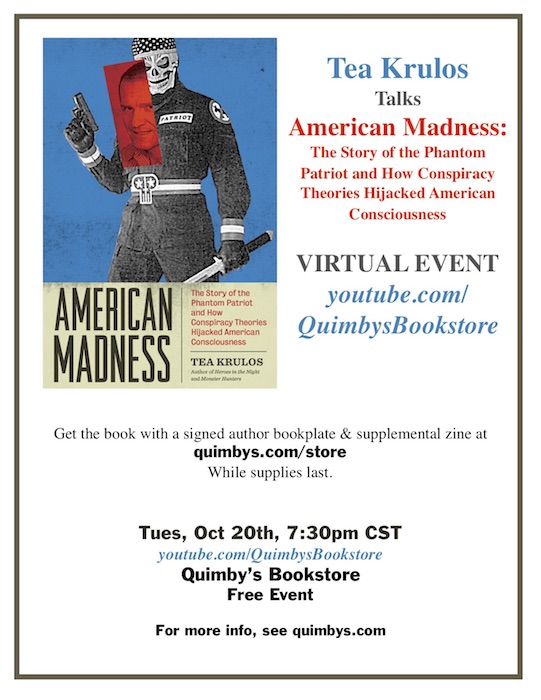