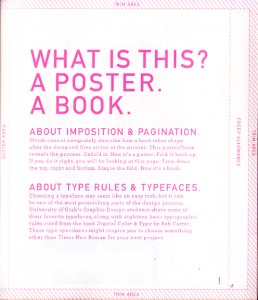 1. The Chicagoan #1 $19.95 – Joining the literary-minded ranks of n+1, The Paris Review, The Believer and Lapham’s Quarterly, and doing it with Midwestern flair, The Chicagoan ressurects a long defunct jazz-age magazine and focuses in on non-profit production, local distribution and general excellence in writing and design. The debut issue is a stunner, a cohesive and relevant blend of fiction, history, innovation, interviews and a 50-page oral history of Siskel and Ebert. -EF

3. Lucky Peach #3 $12.00 – Dave Chang of the Momofuku restaurant empire alternates between griping about everything being done already and the kids having no motivation these days in this new issue which I thought was themed “The Death of Integrity” but instead seems to be about, uh, “Cooks and Chefs”. I’m still up in the air about how self-referential this magazine is – it’s sort of like a chef perzine with a big magazine budget, which sometimes makes it’s cavalier attitude feel like chef crony-ism and empty trash talk. All the same, I’m interested in eating and the Matt Furie centerfold is sooper cute. Food is dead, long live food. -EF

5. Doris #29 by Cindy Crabb $2.00 – More mini horse adventures(!), tales of life, grandparents and Girls Rock Camp plus half the issue devoted to a longer personal essay, charmingly titled “How I learned to stop worrying and love being queer.” It’s a new issue of Doris, of course you should read it. -EF

6. Sammy The Mouse Book 1 TPB by Zak Sally (Lamano 21) $14.00 – Zak Sally collects his curmudgeon mouse comics and prints a beautiful 2-color graphic novel-collection-thwarted spirit quest. A labor of love that fears neither the grotesque nor the unstable, to be held and dug. -EF Thanks to everybody that came out to this awesome event last week!

9. Birthday Boy Comics #1 by Matthew Koerber and Eric Scheidt $6.00 – These harbringers of fun give you a  carnal comics tag team repleat with multiple costume changes and plenty of saliva close-ups. -EF 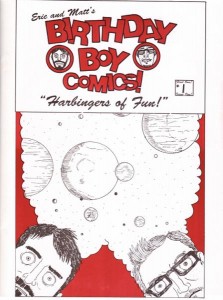 10. Kramers Ergot #8 by Sammy Harkham and Dan Nadel (Picturebox) $32.95 – This latest Kramer’s anthology feels a little bit like cocaine and a reptile tank. The contemporary comics contributions are bookended by Robert Beatty’s retro-digital airbrush wizardry and bisected by higloss cgi still lives by Takeshi Murata. Then there’s a mouthwash Preface by Ian Svenonius’ space cowboy essay “Notes On Camp, Part 2”. Followed by some great cartoonists paring it down and playing it cinematic and cool – CF’s Hunger-ish scenario, Harkham’s Kubrick’s cube, Ben Jones gives us a long yarn in a dental floss line, Frank Santoro and Dash Shaw do a foggy bit about sexual predator entrapment hued in Cold Heat pervert-purples…