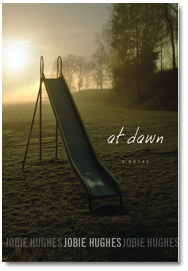 Based on Jobie Hughes’ own life journey, Jobie Hughes’ new novel, At Dawn, presents a raw and gritty coming of age tale that powerfully captures the angst and big questions of today’s generation. Set against the background of the recent American recession, former high school wrestling champion Stratton Brown, escapes a dark past in his small Ohio hometown for a new beginning in the Windy City. Beneath the gruff labor of building a new life, he eventually discovers a way past the ghosts of his past and a new path to the American dream.

“Hughes combines coming-of-age tale, portrait of the artist as a young man, and father-son saga in a well-crafted novel…[with] pathos, wit and insight into the relationships that define our lives.” ––Publishers Weekly

Jobie Hughes is a graduate of Columbia University’s School of the Arts. He made national headlines as “Pittacus Lore,” the mysterious co-author of the # 1 New York Times science-fiction bestsellers I Am Number Four (co-written with James Frey) and The Power of Six  which have sold over a million copies worldwide. His work has been translated into twenty-six languages and published in forty-eight countries.