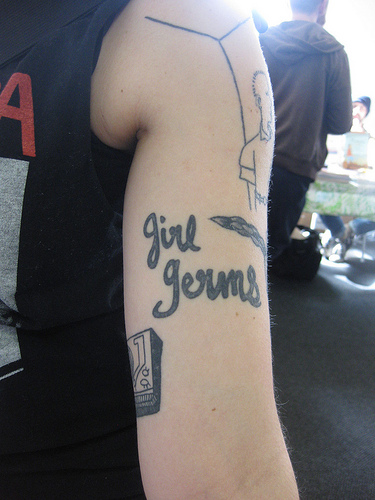 The 2012 Chicago Zine Fest will take place Friday and Saturday, March 9th & 10th of 2012!  For Saturday’s Zine Exhibition, it will return to Columbia’s Conaway Center as the first two years.

Stay tuned to chicagozinefest.org for updates.

And hey! Here’s some highlights from Chicago Zine Fest 2011:

Some cool stuff this week: A new mini from Alec Longstreth, a new LOEG from Alan Moore, The Comics Journal back in action, a whole mess of awesome stuff from Sparkplug, a book of postcards by local artist Paul Hornschemeier, Adbusters and more. 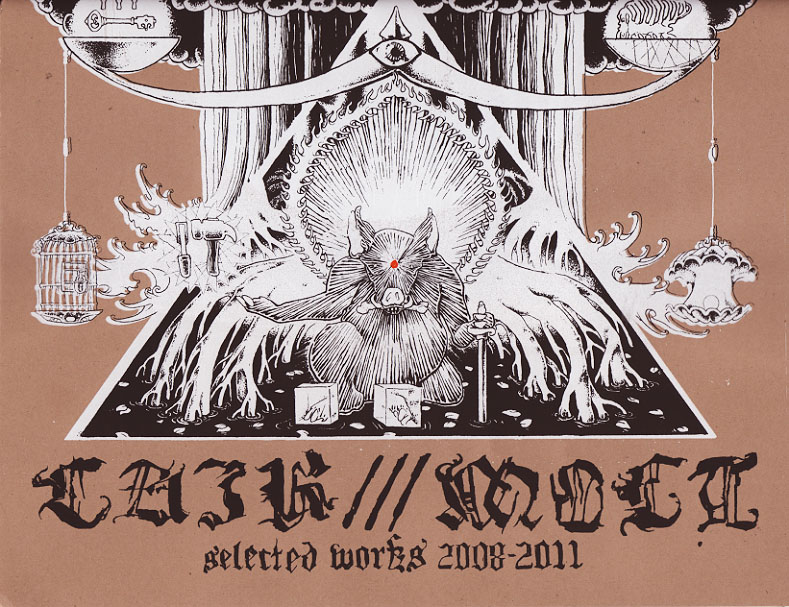 ART & DESIGN BOOKS!
So So Heroes 30 Postcards by Paul Hornschemeier (Chronicle) $9.95
Untitled III This is Street Art (Carpet Bombing Culture) $34.95
Graffiti Burners ed. by Björn Almqvist (Dokument) $29.95 – The most eye-popping graffiti of today! New times, new ideas. In cities worldwide, graffiti art is constantly being taken to higher levels. The will to burn all resistance, to outdo all the others, brings about unexpected and amazing results. Graffiti Burners shows us how techniques have been refined and letter construction distorted, how colour combinations have blossomed and concepts developed. The competition for mastery is burning hot! In addition to amazing pictorial material, several of the writers talk about their pieces and what burners mean to them. Moreover, they offer tips and guidance to those who want to do a burner of their own. Graffiti Burners offers a unique opportunity to acquaint oneself with the progress of the last few years; to be inspired and impressed. In Graffiti Burners the world’s foremost writers show us their favourite works. In short, the best of the best! Aroe (UK), Bates (DK), Bio (USA), Kacao77 (D), Rime (USA), Scan (CA) and Suiko (JP) are just a few of the contributors to the book. 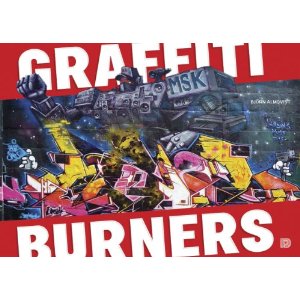 Conseil Juridique et Artistique Legal and Artistic Counsel by Audrey Chan $15.00
Curiosities of Janice Lowry (Grand Cent) $45.00
Big Poster Book of Hindu Dieties: 12 Removable Prints by Sanjay Patel (Chronicle) $24.95
Lowrider Coloring Book by Oscar Nilsson (Dokument) $9.95
OFFF, Year Zero: Artwork and Designs from the OFFF Festival ed. by Rob Chiu (MBP) $60.00 – OFFF is a post-digital culture festival, featuring some of the world’s most relevant contemporary artists, designers, and media mavens. This anual collection features artwork and essays created specifically for the festival and only available in this book. This edition has an exclusive DVD, and every page is die-cut, so the artworks can be hung on the walls. Contributing artists and designers includes Stefan Sagmeister, Rick Poyner, Erik Spiekermann, Keetra Dean Dixon, and Vimeo founder Blake Whitman. 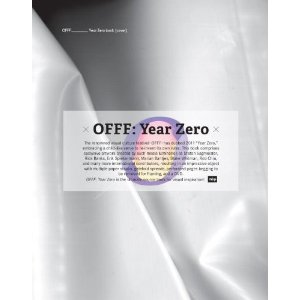 FICTION!
Dream-Quest of Unknown Kadath And Other Oneiric Works by HP Lovecraft (Creation) $14.95
Too Young To Fall Asleep by Sally Weigle (Chicago Center for Literature and Photography) $20.00 – Why would a poetry-writing high-school emo girl from suburban Chicago volunteer for the Iraq War? And when both of her legs are blown off in a non-combat IED explosion, how will she ever recover?
Salt Creek Anthology: A Hyper Fiction Project (Chicago Center for Literature and Photography) by Jason Fisk $20.00 – A couple meet in a mental institution, have six kids, and devolve into violent alcoholism. An elderly Polish woman with Alzheimer’s goes insane in front of our eyes. A frazzled empty-nester has her bruiser son move back in, along with a scheming girlfriend planning a surprise pregnancy to get them both back out. And an abusive, overweight, racist monster of a man psychologically lords over them all, a total of twenty-odd characters all living on the same cul-de-sac in the far rural suburbs of Chicago. This “micro-story” collection breaks these families’ adventures down into a series of 75 linguistic nuggets. Each story is a different piece of paper in a box, and you can read them in any order you want.
Black Lung Captain by Chris Wooding (Ballantine) $16.00
The Difference Engine by William Gibson and Bruce Sterling (Ballantine) $16.00 – Back in print! 20th Anniversary edition of this classic text of an imagined 1885: the Industrial Revolution is in full and inexorable swing, powered by steam-driven, cybernetic engines. Charles Babbage perfects his Analytical Engine, and the computer age arrives a century ahead of its time.
The Chicago Landmark Project: 12 World Premiere Plays About Chicago Places by var. (Theatre Seven of Chicago) $16.00 – Using distinct locations in zip codes from Rogers Park to the South Side, The Chicago Landmark Project offers twelve diverse snapshots of Chicago life from present day to the distant past.

MUCKRACKING, MEMOIRS, MAYHEM, MISCREANTS & MISCELLENOUSNESSESESNESS!
Go the Fuck to Sleep by Adam Mansbach and Ricardo Cortes (Akashic) $14.95
Girls of Murder City: Fame Lust and the Beautiful Killers Who Inspired Chicago by Douglas Perry (Penguin) $16.00 – Now in soft cover.
Leatherman: The Legend of Chuck Renslow by var. (Prairie) $24.99
911: The Simple Facts Why the Official Story Can’t Possibly Be True by var. (Soft Skull) $12.00
Finding My Place: One Man’s Journey From Cleveland to Boston and Beyond by Judah Leblang $15.95
Working in the Shadows: A Year of Doing the Jobs Most Americans Won’t Do by Gabriel Thompson (Nation) $14.99
Be Honest and Other Advice From Students Across the Country From 826 National by Ninive Calegari (New Press) $25.95
Page One: Inside the New York Times and the Future of Journalism by David Folkenflik (Public Affairs) $15.99 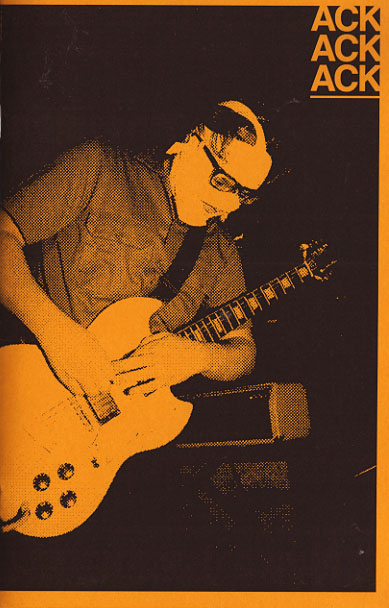 Cindy Crabb Reads From The Encyclopedia of Doris 9/3

Cindy Crabb has been writing the influential, internationally distributed, autobiographical-feminist zine Doris since the early ‘90’s. Her new book, The Encyclopedia of Doris, brings together the last 10 years of zines and a ton of new writing as well. In it, she explores subjects like consent, feminism, abortion, death, self-image, creativity, shyness, queer identity, addiction, punk and anarchism. Crabb is the editor of the zines Support and Learning Good Consent. She lives in South-East Ohio with her miniature horses, plays in the punk band Snarlas, and is a sexual abuse survivor advocate.

“…zines are a space where third wave feminist theory is emerging, and many scholars don’t recognize this because they don’t read zines.  They should read Doris.”     –Alison Piepmeier, Author of Girl Zines: Making Media, Doing Feminism

Cindy Crabb’s work has been featured in such places as: The Utne Reader, Maximum Rock and Roll, and Cometbus. Her work has also been in such anthologies as We Don’t Need Another Wave: Dispatches from the Next Generation of Feminists; Experiencing Abortion: A Weaving of Women’s Word; and A Girls Guide to Taking Over the World: Writing From the Girl Zine Revolution. Her diaries and papers are housed at the Schlesinger Library at Radcliffe. She has spoken at colleges, libraries and community centers across the country.

By the time Christopher Boucher reaches Chicago he will have driven nearly 3,000 miles across America in his 1972 Volkswagen Beetle, reading from How To Keep Your Volkswagen Alive, playing the novel’s theme-song on his banjo, and reading to people, roadsigns, potholes, old barns, paramedics, flowers and railroad tracks. “I see this tour as a natural extension of the book,” he says. “The novel was written in a whimsical, playful style, but it was inspired by…my father, and the sense of wonder that he instilled in me.  That sense of wonder propelled every sentence in the book, and I want it to fuel the tour as well.”

In How To Keep Your Volkswagen Alive Christopher Boucher has created a zany literary universe, a place where metaphors shift beneath your feet, familiar words assume new meanings, objects talk, trees attack, and time actually is money. Modeled on the cult classic 1969 hippie handbook of the same name, How To Keep Your Volkswagen Alive is an astonishing tour-de-force that calls to mind the off-kilter comedy and inspired fabulism of Richard Brautigan, Kurt Vonnegut, and George Saunders. The prose summersaults, but the book also tackles some of life’s biggest questions: How do you cope with losing a parent? What’s the secret to raising a child? How do you keep love alive? How do you get your car to start?

“Writing to save your life—and your 1971 Volkswagen—is at the heart of this wildly imaginative debut… Readers are in for a fresh, memorable ride with this inventive ‘collage of loss'”—Publishers Weekly (starred review)

“A new, exuberant novel-world. Goofiness and grief are in perfect harmony in this impressive, moving debut.”—Sam Lipsyte 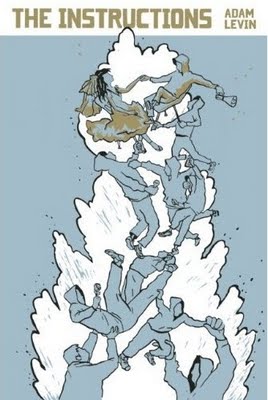 Tags: Adam Levin, Christopher Boucher, How To Keep Your Volkswagen Alive, The Instructions.

3. 8-Track Mind #101 Zines vs Blogs ed. by F.R. Russ Forster $3.00 – WELCOME BACK 8-TRACK MIND!!!! Holy Moly! After a 10-year hiatus 8-Track Mind heeds the call of the Revenge of Print and pulls a fresh new issue out of the oven! Man, this was the zine that I remember reading way-back-when that REALLY made me think, “Woah, you really can make a great zine about ANYTHING.” Truly. This issue goes light on the 8-trackology but stays true to its analog-obsessed roots with a well-rounded symposium all about “Zines Versus Blogs”. -EF — Contributors: Chris Barrows, Peter Bergman, Joe Carducci, Kim Cooper, Brendan DeVallance, Tony DuShane, Sam Green, Lance Laurie, Alison Levy, Tom Lynch, Danny Plotnick, Dan Sutherland, V Vale and Lucien Williams.

6. Fine Fine Music by Cassie J. Sneider (Raw Art) $15.00 – “FINE FINE MUSIC is a collection of stories about the other side of rock and roll and coming of age in the land that time forgot. Lake Ronkonkoma is stuck in 1981, an alcoholic blackout of unnatually tan people waxing their Camaros to Foreigner on cassette and knowing the words to every Billy Joel song whether you want to or not. From an internship making Seamonkey costumes, a childhood fear of My Buddy dolls, and a heartbreaking crush on Aerosmith, funny lady Cassie J. Sneider delivers her tales of growing up in a land of fist-pumping Snookies with the antagonistic wit of a record store clerk.”

9. East Village Inky #47 by Ayun Halliday $3.00 – Ayun gives us a Mermaid Parade 101 and plenty of scrapper parent scene reportage. Topped with tales of a sourdough starter (you know how New Yorkers like to brag about how cultured they are). -EF 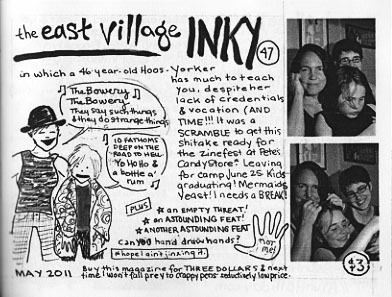 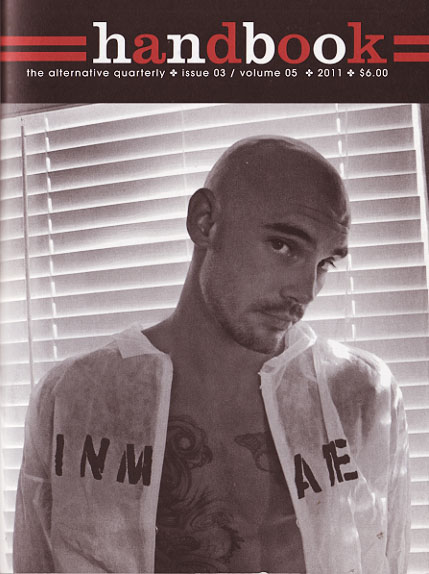