I Am at Metaphor – Actually I’m at Extended Metaphor by pollychernina $13.00

Deafblind People In History – It’s Not Just Helen Keller by Violet B. Fox $3.00

Adventures In Foreign Language Zooms #1 In German by David Villegas $2.00

Then March Lasted Five Years: An Activity Book – About Being a Nurse During the COVID Times by A. Hanna $5.00

Children of Palomar & Other Tales: A Love and Rockets Book by Gilbert & Mario Hernandez (Fantagraphics) $24.99

Fabulous Furry Freak Brothers: In the 21st Century and Other Follies by Gilbert Shelton, Paul Mavrides and Dave Sheridan (Fantagraphics) $22.99

Winter of Our Pandemic by David Collier (Spare Parts Press) $20

The Reddest Rose: Romantic Love from the Ancient Greeks to Reality TV by Liv Stromquist (Fantagraphics) $24.99

So We Can Know: Writers on Pregnancy Loss Abortion and Birth edited by Aracelis Girmay (Haymarket Books) $21.95

The Curious World of Bacteria by Ludger Wess $29.95 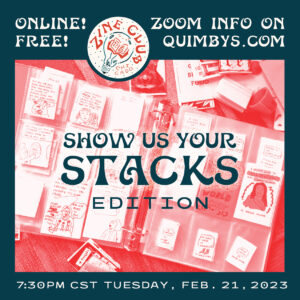 Whenever we ask folks which subjects they’d like to discuss at our events, zine organization tops the list. So in February, we’re bringing back our popular Show Us Your Stacks theme for the third year in a row!

This month, we’ll be meeting on Zoom so y’all can show off how you organize the zines you choose to bring home with you. Whether you meticulously catalogue your zines, toss them in random piles, or something in between, we want to know about the ways you arrange, display, and categorize your personal collection.

Get your self-published stash in order (or leave it messy), BYOS(nacks), and join us on Zoom for Zine Club Chicago Online: Show Us Your Stacks Edition at 7:30 p.m. CT Tuesday, February 21 on Zoom!

** RSVP required ** We want to make sure that our online Zine Club Chicago events are a safe space, so we won’t be releasing the Zoom link publicly. If you’d like to attend, please email zineclubchicago@gmail.com to RSVP by 9 p.m. CT Monday, February 20 (the evening before our event). We’ll email you the Zoom link by 5 p.m. CT on Tuesday, February 21.

Zine newbies and longtime enthusiasts alike are always welcome at Zine Club Chicago, the city’s only book club-style event for people who read zines. This free monthly series is produced by Cynthia E. Hanifin and sponsored by Quimby’s Bookstore. Anna Jo Beck designs our monthly flyers, created our logo, and made our Zine Club Chicago Shout-Outs site, where folks can peruse and recommend zines we’ve discussed at our events.

Baphometta and the Fortune Teller by Davidt Dunlop $8

Student Planner: A Reflection On My Four Years at Art School and Educational Institutions $15

Figure Drawing Companion: 100 Plus Poses to Sketch On the Go by Maria B Cosenza $21.99

Comics by Douglas Cueva, $1 each: Tiny Comix #1 Call Me Asmael by Doug Cueva, Vomito #3 Im Not an NFT Comics Anthology

Falke by JD Riley and Kradeelav $16

Hacks for Hacks by Jude Bettridge $4

The Day the Cat Got Shot by Ben Dudley $17

101 Films You Could See Before You Die: A Film Guide for the Disenchanted by Billups Allen (Goner Records) $18.99

Busking Blues: Recollections of a Chicago Street Musician and Squatter by Westley Heine $20 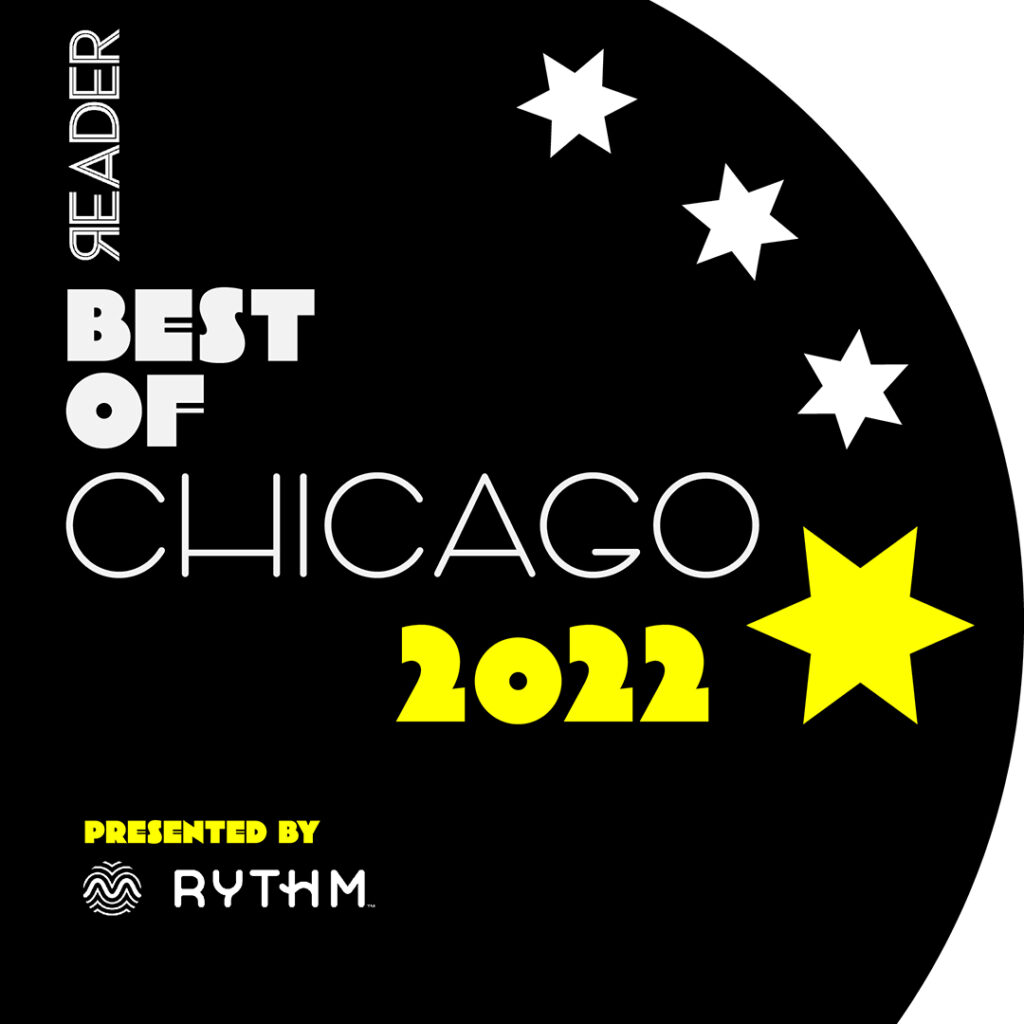 Thanks, Chicago friends! We were nominated for Best Comics Shop in the Buy Local category of the Chicago Reader’s Best of Chicago 2022 Readers Poll. Would you do us a solid and vote for us?

And tell yer friends! Use #BOC2022 on the social meds.

The Escapist Artist #69 by Jolie Ruin $2

Poems For a Sharp Boy by Katerina Ellison-Batt $1

Tiny Words From Far Away $1

From Fluke Publishing: Invisible Eye #2 $11, People In My Panic Room by Ian Addison $5

What I Wish I Knew About the Pelvic Floor Before I Developed Chronic Pain by Amy Wanner Jeansonne $10.00

zines by Allison Catuira $2 each: Body In Space, Catfish Sinigang, Nilaga, Tastes Like Home: A Collection of Recipes of My Comfort Foods

W the Whore by Anke Feuchtenberger and Katrin de Vries $39.95

Darkwater: Voices from Within the Veil by WEB DuBois (McSweeneys) $26

The Family Roe: An American Story by Joshua Prager $20

Aleister Crowley In Paris: Sex, Art and Magick In the City of Light by Tobias Churton $40

Uppercase #56 A Magazine for the Creative and Curious $20