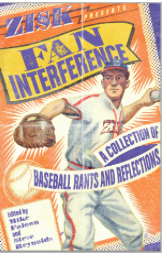 Intending to cover baseball from a fan’s perspective, the first issue of Zisk was published in the summer of 1999 and is now published twice a season. Named for the former “South Side Hitman” Richie Zisk, the zine is for those who love the charm, history and quirks of America’s pastime. The publication is edited by New York-based writers Mike Faloon and Steve Reynolds and is touted as “the Baseball Magazine For People Who Hate Baseball Magazines.” FAN INTERFERENCE: A COLLECTION OF BASEBALL RANTS AND REFLECTIONS  (Blue Cubicle Press, 2013) is an anthology of the best musings culled from over 15 years of Zisk. Edited by MIKE FALOON (Go Metric, Egghead.) and STEVE REYNOLDS (Trouser Press, Party Like It’s 1999) and featuring contributions from academics to punk rockers, comedians to fans with an ax to grind, FAN INTERFERENCE examines the intersection of baseball, lifestyle and music — all colored with bit of nostalgia, a great deal of humor and, often, a tongue planted firmly in cheek.

“…For those who love baseball for its charm, history and eccentricities and not merely as something to play a fantasy league around. It’s for the true fans who populate the upper deck, not the party animals in the bleachers.” – Chicago Tribune

“Baseball is the most important thing in the world. It’s also completely meaningless in the grand scheme of life. These guys recognize that those two philosophies can co-exist in the human brain, which makes their writing a truly electric, and all too rare, jolt to the synapses.” – Variety