Gregory Harms Reads From It’s Not About Religion 9/15 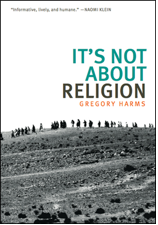 When the Middle East is covered on the news or depicted in film, what is shown is a region defined almost exclusively by violence, chaos, and extremism, and a common question often arises in response: Does religion have anything to do with it?

In It’s Not About Religion, Gregory Harms examines a range of topics in an effort to answer the question. As the book’s title indicates, the region’s woes and instability are in fact not caused by biblical or Islamic factors. Harms reveals a list of entirely secular factors and realities as he examines how and why Americans view the Arab Middle East the way they do; the history of European and U.S. involvement in the region; the emergence of Islamic fundamentalism and terrorism; and how academics and the mass media tend to discuss the region and its inhabitants.

In roughly one hundred pages, the reader is shown a constellation of history and culture that will hopefully help move the conversation of the Middle East and U.S. foreign policy in a more grounded and precise direction.

“An informative, lively, and humane look at the real sources of conflict and struggle in the [Middle East].” –Naomi Klein, author of The Shock Doctrine

GREGORY HARMS is an independent scholar and the author of The Palestine–Israel Conflict: A Basic Introduction (3rd ed., 2012) and Straight Power Concepts in the Middle East: US Foreign Policy, Israel, and World History (2010). His articles appear on CounterPunch, Truthout, and Mondoweiss. He has been interviewed on BBC Radio and Chicago Public Radio.

Tags: Gregory Harms, It’s Not About Religion.
Logging In...