Quimby’s Offsite at the Hideout: Brooks Headley In Conversation with Steve Albini About the Superiority Burger Cookbook 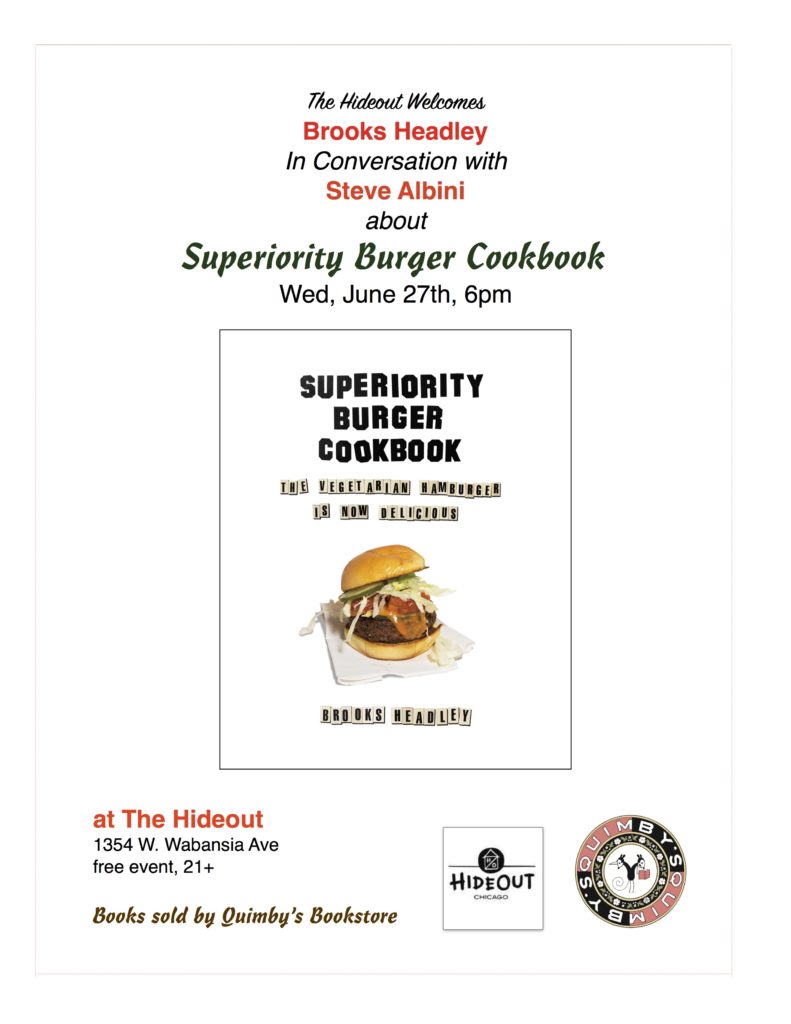 Author Headley Brooks and his pal musician/producer Steve Albini will be in-conversation for this talk + signing event.

Brooks wrote The Superiority Burger Cookbook based on the veggie burgers he sells in the NY restaurant of the same name. Before that he played drums in lots of bands like Universal Order of Armageddon, Born Against, (Young) Pioneers and others.

Producer and Chicago musician Steve Albini runs his production studio Electrical Audio, was in bands like Shellac and Big Black, and publishes a food blog  WhatIMadeHeatherForDinner.SteveAlbiniCooks.com

The Vegetarian Hamburger Is Now Delicious

“Superiority Burger is the most radical restaurant in New York. . . the vegetarian cooking of Mr. Headley and his crew, served in paper boats and cartons, is surprising,

“What makes Superiority Burger a sensation is bigger than the food. It’s the understated yet lengthy creation of a singular vision, a place that evokes memory and comfort yet pushes food to a happier, more enticing place with considerable wit and verve.”

In 2015, James Beard Award-winning chef Brooks Headley exiled himself from the fine-dining realm to sell six dollar veggie burgers in a 300-square-foot space in Manhattan’s East Village, aptly named “Superiority Burger.” A cozy counter hang-out filled with affordable, innovative food, Superiority Burger is a protest against the idea that extraordinary fare is the exclusive domain of the elite. Inciting a civilized vegetable revolution, Headley and his crew have rewritten the rules of non-meat cookery.

With recipes for a coterie of other delights—fresh, vegetarian, accidently vegan, and always incredible—SUPERIORITY BURGER COOKBOOK is a must-read for home cooks who want something delicious, new, and imminently within their reach. A home-friendly primer on meatless American cooking made delicious, SUPERIORITY BURGER COOKBOOK will be drooled over by vegetarians, vegans and steadfast carnivores alike.

Brooks Headley, chef-owner of Superiority Burger, was named best pastry chef in the country in 2013 by the James Beard Foundation. His previous cookbook, Fancy Desserts, won the Piglet Tournament of Cookbooks from Food52. He lives in New York City.

“A cupcake primer this is not. The punk rocker turned pastry chef at NYC’s Del Posto has delivered a hilarious page-turner.” —Bon Appétit

“The most entertaining cookbook in memory. . . A game changer.”—Anthony Bourdain

“When was the last time a cake recipe made you weep with laughter? Exactly. Brooks Headley—punk dude, vegetarian sympathizer, stealth genius, hero to all in the New York pastry world— has created something entirely new. It’s a cookable memoir about his life in music and food (i.e., lots of time in basements), but not the kind they’ll make a cute movie out of.” — Christine Muhlke, Bon Appétit

“A visceral and attitudinal and gustatory joy-ride, an exhilarating few laps around a 4-star kitchen in a beat up obscure punk rocker’s tour van. And Brooks Headley is as devoted to the sweet joy as he is to the hard ride of excellence in the pastry kitchen.” 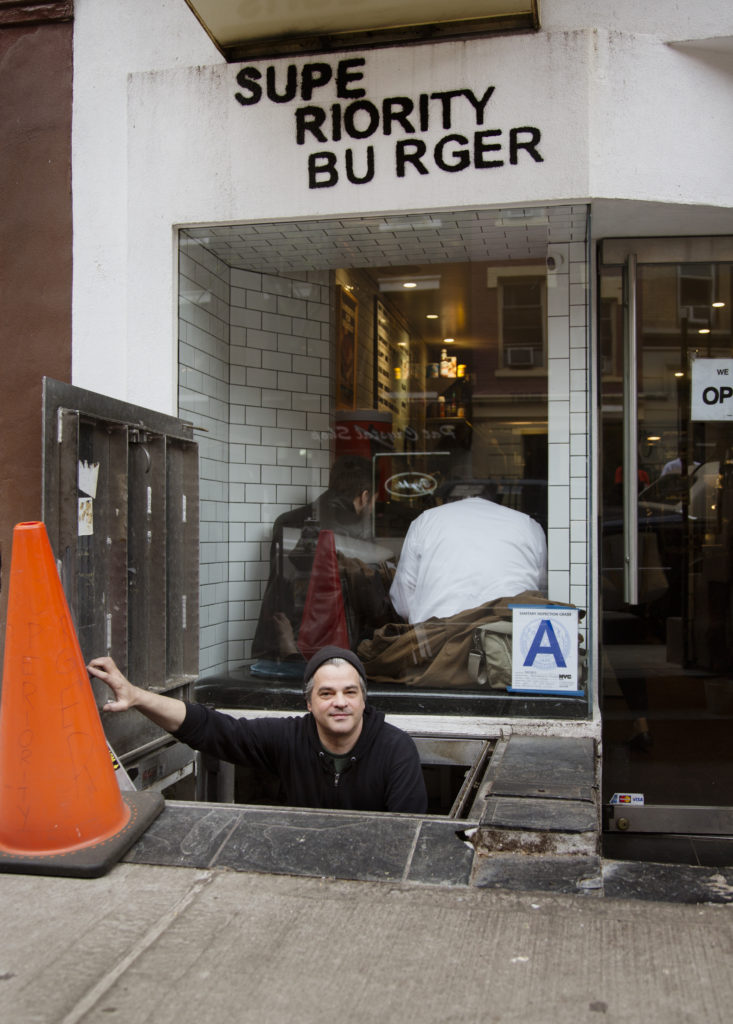 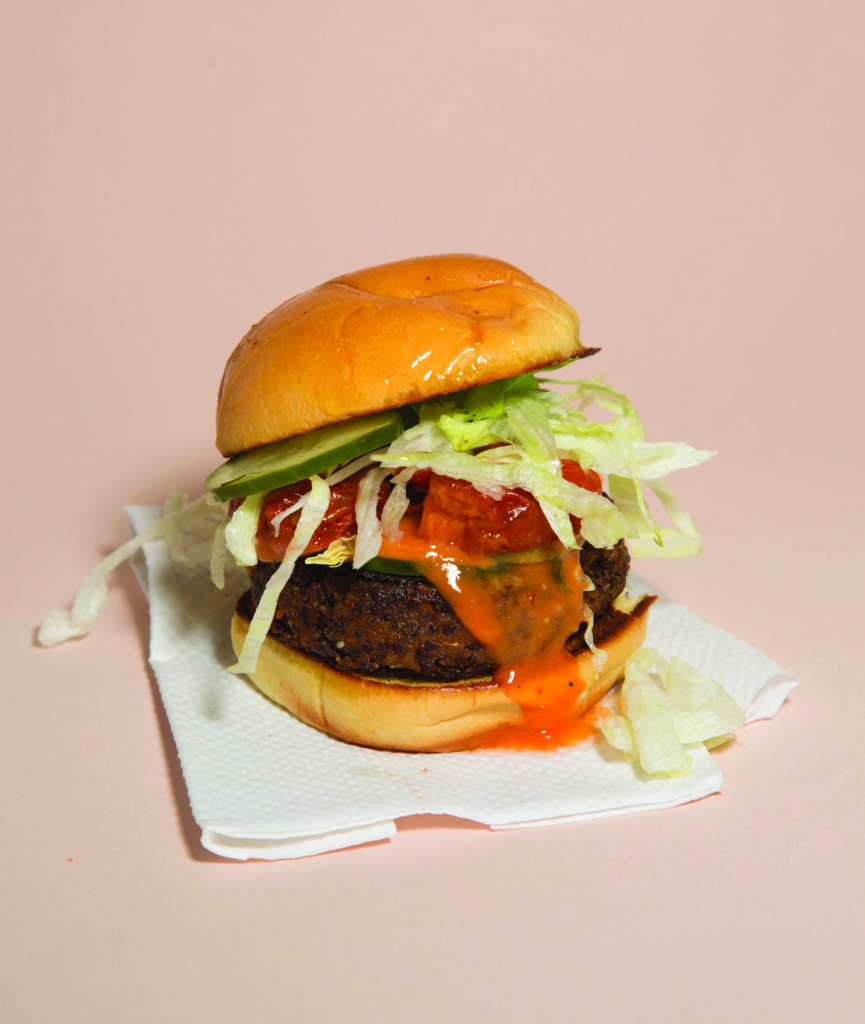 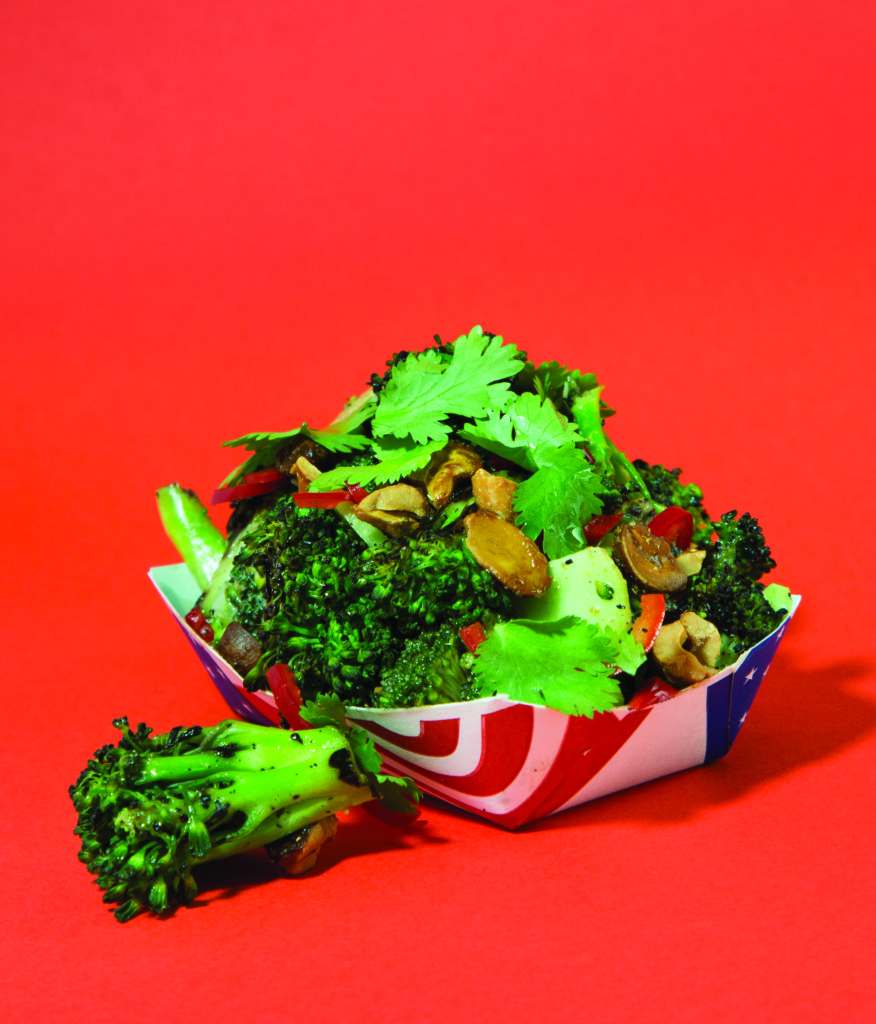 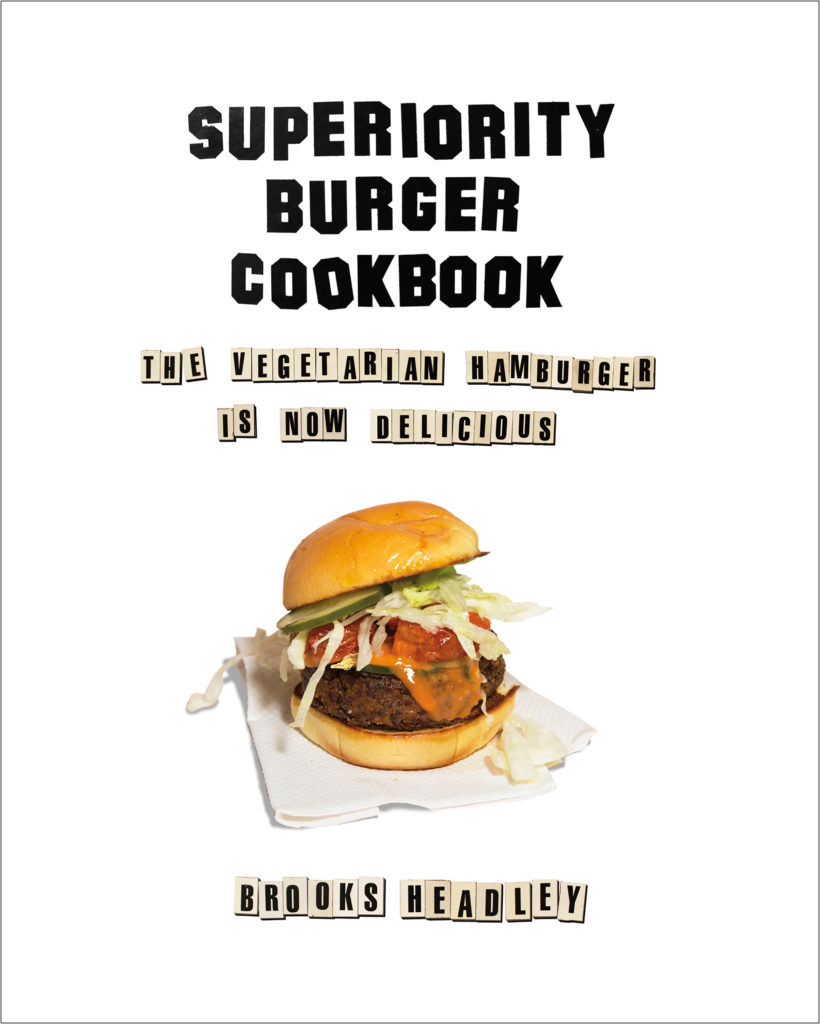 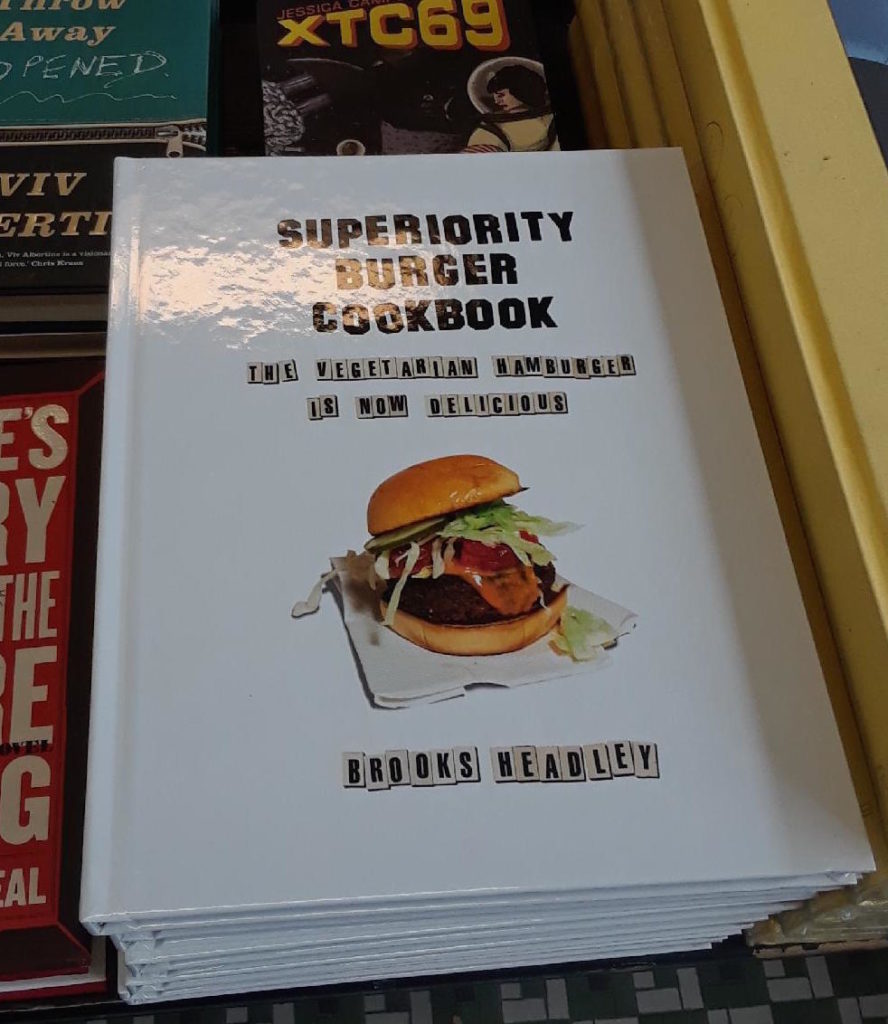 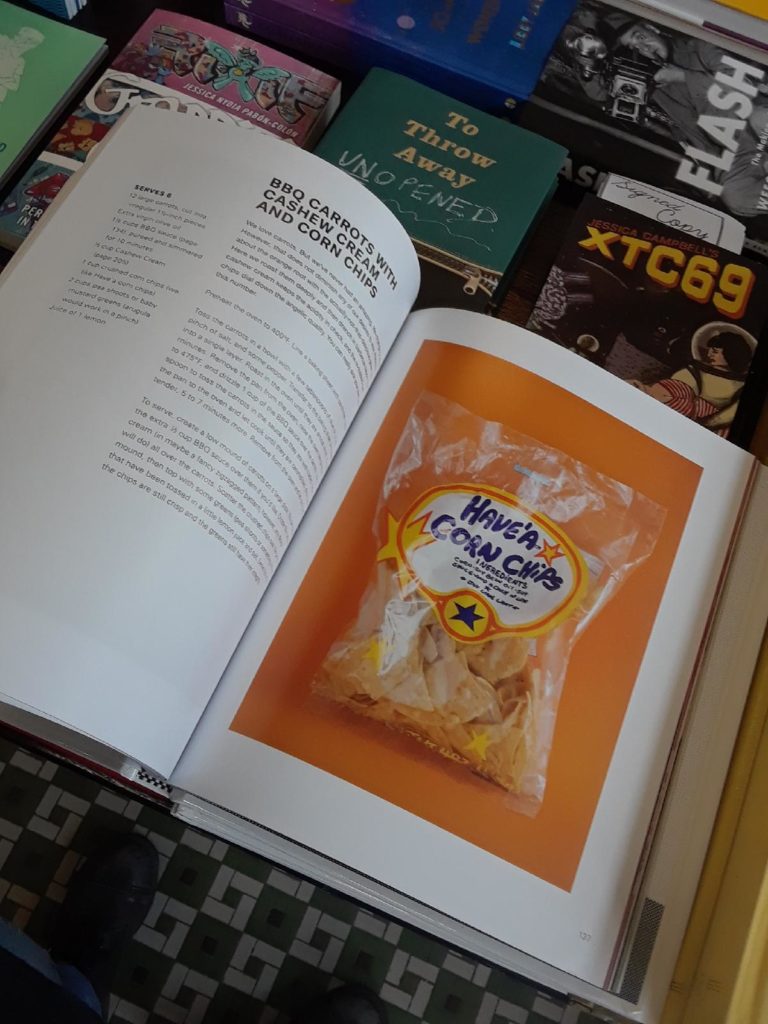 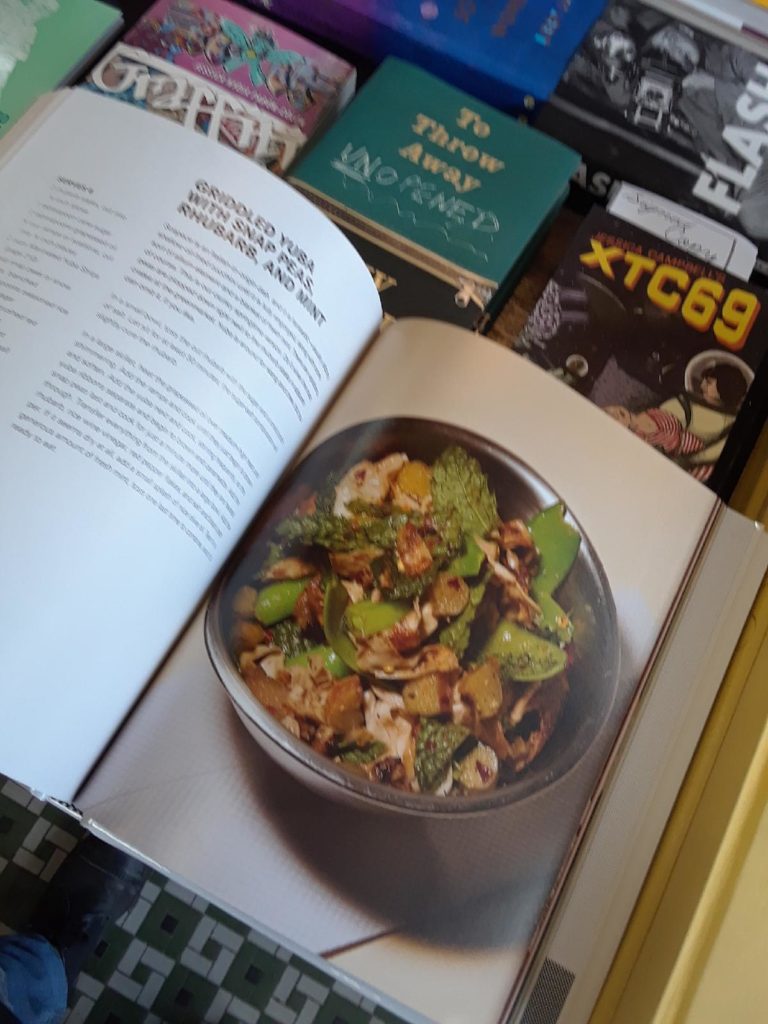