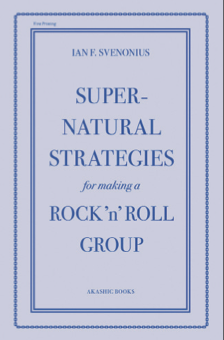 Don’t miss rock icon Ian Svenonius reading from his provocative, extremely hilarious, and bizarrely erudite book entitled “Supernatural Strategies for Making a Rock ‘n’ Roll Group.” The book pretends to be a “how-to” guide for people wanting to start a rock band, but it is so much more — fusing a meticulously researched sociopolitical examination of the history of rock and roll music with Ian’s trademark humor and cutting wit, one of the best rock and roll satires ever written.  The author, who is most well-known as the singer of The Nation of Ulysses and The Make-Up, two of the most popular bands to emerge from DC’s Dischord record label, is a charismatic showman and performer. He is also the author of the underground smash book of essays The Psychic Soviet.

“People now expect a nice ‘career’ from their music. This is misguided and, today, perhaps impossible. Suffering is necessary to maintain the integrity of the group as an object.” —Brian Jones, Rolling Stones, as told to Ian F. Svenonius from beyond the grave

“Rock ’n’ roll is an American art, brought about by the Industrial Revolution, the harnessing of electricity, and the miscegenation of various poor, exploited, and indentured cultures in the USA.” —Jimi Hendrix, as told to Ian F. Svenonius from beyond the grave

“Since [this] is a nation founded on the ideas of individualism, rebellion, evangelism, white supremacy, black slavery, expulsion of native peoples, expansionism, and commerce, these values all play a part in the formation of the USA’s primary and arguably greatest cultural export.” —Richard Berry, composer of “Louie, Louie, as told to Ian F. Svenonius from beyond the grave

Supernatural Strategies for Making a Rock ’n’ Roll Group addresses never-before-discovered revelations about that most beloved American cultural pastime; not only does this book help the aspiring inge?nue to start his or her own rock ’n’ roll group, it also confronts the strange and murky origins of the group itself and the reason for its ubiquity and cultural currency, still going strong since its initial, shocking, and cataclysmic appearance during the cold war.

BY TALKING TO DEAD ROCK ’N’ ROLL STARS such as Brian Jones, Jim Morrison, et al., for pointers, Svenonius—the front man of influential groups The Nation of Ulysses and The Make-Up, and currently the singer of Chain & the Gang—is able to furnish a more complete picture than the normal myopic critic/historian eggheads. Supernatural Strategies proposes the origins of the group to be not just blues music as is commonly supposed, but also the street gangs which terrorized the landscape of industrial-era America, and which were romanticized in media (e.g., Westside Story).

SUPERNATURAL STRATEGIES EXPLAINS THAT THE GROUPS’ use as a propaganda instrument against Socialist ideology was central to their proliferation during the postwar era, and suggests that the continued tolerance of the presence of groups might only be totemistic, as they have possibly outlived their usefulness to the elite.

THE BOOK OUTLINES THE SIGNIFICANCE of group names, live concerts, vans, sex, drugs, band photos, records, record labels, recording studios, and all the other bugaboos which serially feature in group life. It explains the future relevance of groups and the strategies that groups can use to successfully understand and embody their destinies, historic roles, and responsibilities. It is a must- read for anyone who is alive in the early portion of the new century.

SUPERNATURAL STRATEGIES is a combination of occult esoterica, how-to manual, socioeconomic textbook, fanzine, and revolutionary pamphlet, this book is bound to overtake Plato, McLuhan, Marx, and Hesse in dogs eared.

This book touches on such related topics as: How rock ‘n’ roll emerged from American gang culture; The role of the Soviet Union in modern popular culture; Why it’s crucial that members of rock ‘n’ roll groups communicate with each other in an indirect manner; Why music groups need strict codes of discipline; The historic underpinning of groupie culture, and the related issue of necrophilia; The influence of the Black Panthers on rock ‘n’ roll music; The significance of vans and other motorized vehicles to rock ‘n’ roll beyond the obvious transportation aspect; The diminishing meaning of the rock ‘n’ roll group in 2013 and beyond; What young musicians today can still learn from Buddy Holly, Richard Berry, and Brian Jones.

Check out these links for a small sampling of what some of the press is saying about the book so far:
Onion A/V Club
Los Angeles Times
American Songwriter
Mother Jones

Press and publicity inquiries can be directed to Ibrahim Ahmad: ibrahim(at)akashicbooks(dot)com.

Don’t miss the official after party at The Owl where Ian and Calvin Johnson will be DJing at The Owl from 10-4. Ian will have a mixtape soundtrack for the book for sale at the after party. These will be a numbered edition of 100 tapes with silk screened covers. 2521 N. Milwaukee. 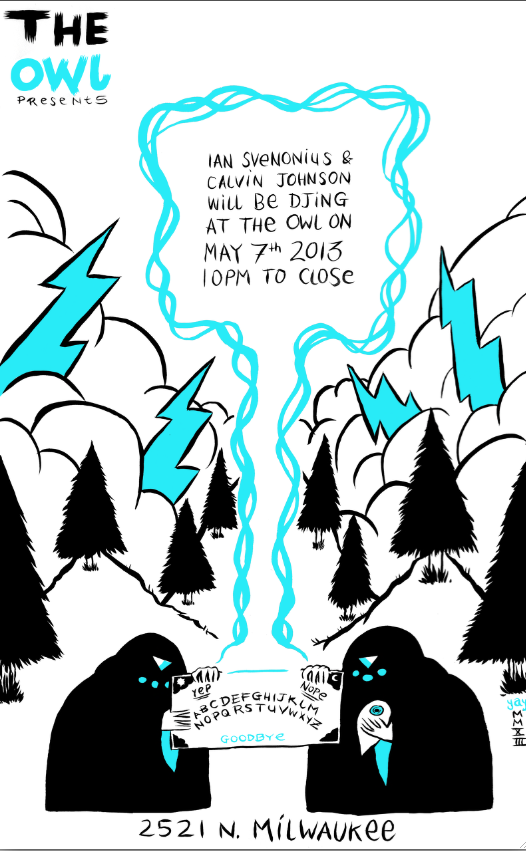