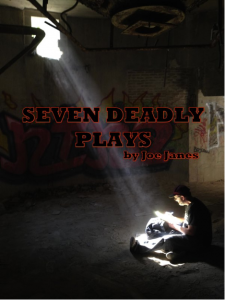 In Joe Janes’s new book Seven Deadly Plays, he assembles seven plays he wrote that are set in dangerous places in and around Chicago. All the plays were written in one week and then presented at Strawdog Theatre in the summer of 2012. The locations include a speedboat on Lake Michigan, an urban farm in Englewood, the abandoned Damen Silos, a haunted cemetery, a fun house, up in a big tree and Lower Wacker. The approach was similar to how many 24-Hour projects are constructed. Directors and casts were predetermined. Janes visited each site and then wrote a play that day which was submitted to the director and actors the following morning. The first group had six days to prep their play. The last group had the day of opening night to get ready.  The result was a dynamic mix of comedy and drama in some very unusual settings.

Joe Janes is an Emmy award winning writer and former stand-up who teaches comedy writing at The Second City and Columbia College. He has written for Jellyvision’s “You Don’t Know Jack” and SNL’s “Weekend Update.” He has written three books: 365 Sketches, 50 Plays and Seven Deadly Plays. His full-length plays include Metaluna and the Science of the Mind Revue, A Hard Day’s Journey Into Night and Always Never. He writes regularly for WNEP Theatre and Robot vs Dinosaur. He has been a director for Second City for over ten years including directing the national touring company and Second City main stages in Las Vegas and Detroit.