Art & Design
If You Knew What I Know It Would Be Strange by Jason Jagel (Arkitip) $10.00
Illustrated Poetic Reader by Dan Chainer $5.00 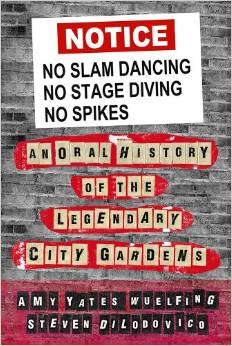 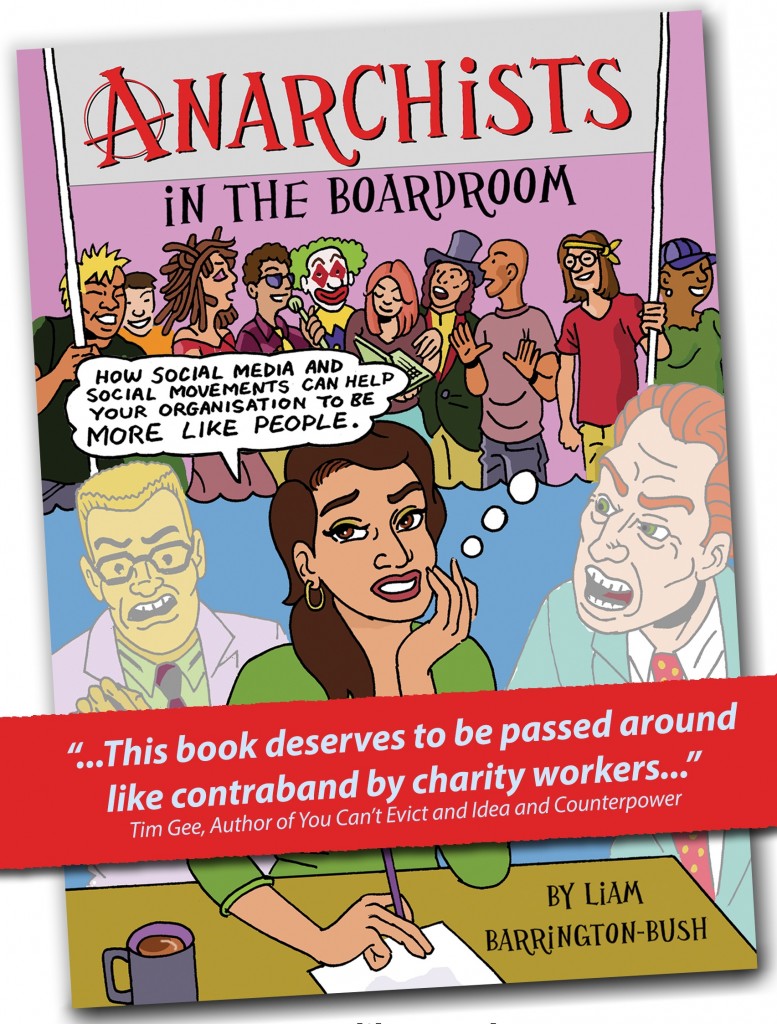 Anarchists in the Boardroom: How Social Media and Social Movements Can Help Your Organisation to be More Like People by Liam Barrington-Bush (More Like People) $20.00 – There are lessons emerging all around us, in the new social movements that have swept the globe, and in the organising patterns found on social media. Could Twitter and Occupy help our NGOs, charities, trade unions and voluntary organisations to both stay relevant in the times ahead and live our values through the ways that we organise? Anarchists in the Boardroom is a journey through worker-run factories, Occupy encampments, a spattering of non-violent direct actions and even a few forward-thinking companies, to make the case for helping our organizations ‘to be more like people.’ It asks us to brush away our ‘professional’ assumptions and interact as we do when we don’t have job descriptions or business plans telling us how to change the world. It reminds us of the power each of us has to make change happen, even within the most entrenched of bureaucracies.

Zines & Zine-Related
Start Your Own Haunted House In Your Home $1.50
Soul Power: A Revolutionary Relationship With the Universe by Hybachi LeMar $3.00

Graphic Novels & Trade Paperbacks
100 Crushes by Elisha Lim (Koyama) $18.00 – Don’t miss Elisha Lim here at Quimby’s CAKE weekend, with MariNaomi & Mike Dawson, as they read from their new graphic novels on 5/30!
Everywhere Antennas by Julie Delporte (D&Q) $19.95 – An unnamed narrator leaves the city for a refuge to get away from technology and bustle, to vascilate between solace and loneliness.
Petty Theft by Pascal Girard (D&Q) $19.95 – What happens when you fall in love with someone you saw shoplifting your book?
Mind MGMT vol 3 HC the Home Maker by Matt Kindt (Dark Horse) $19.99
Manhattan Projects TPB vol 4 by Jonathan Hickman et al. $14.99
Spain and Morocco by Alex Fellows (Conundrum) $25.00
Amerika by Real Godbout (Conundrum) $20.00 – Based on the Franz Kafka novel.
What We Need to Know by Willy Linthout (Conundrum) $20.00
Ex Machina Book 2 TPB by Brian K. Vaughan et al. (Vertigo ) $19.99 – Includes issues #12-20 plus Life and Death Specials by Chris Sprouse.
Dumbstruck vol 1 Starting Line Detour by Charles Riffenbrug IV $16.00
Carnivale: A Kit Kaleidoscope Story by Nick Mullins $19.95

Essays
The Footloose American: Following the Hunter S. Thompson Trail Across South America by Brian Kevin $14.99
What I Was Doing While You Were Breeding: A Memoir by Kristin Newman $14.99
Citizen Keane: The Big Lies Behind the Big Eyes by Adam Parfrey and Cletus Nelson (Feral House) $18.95

Music
God Save the Kinks: A Biography Rob Jovanovic (Aurum) $14.95 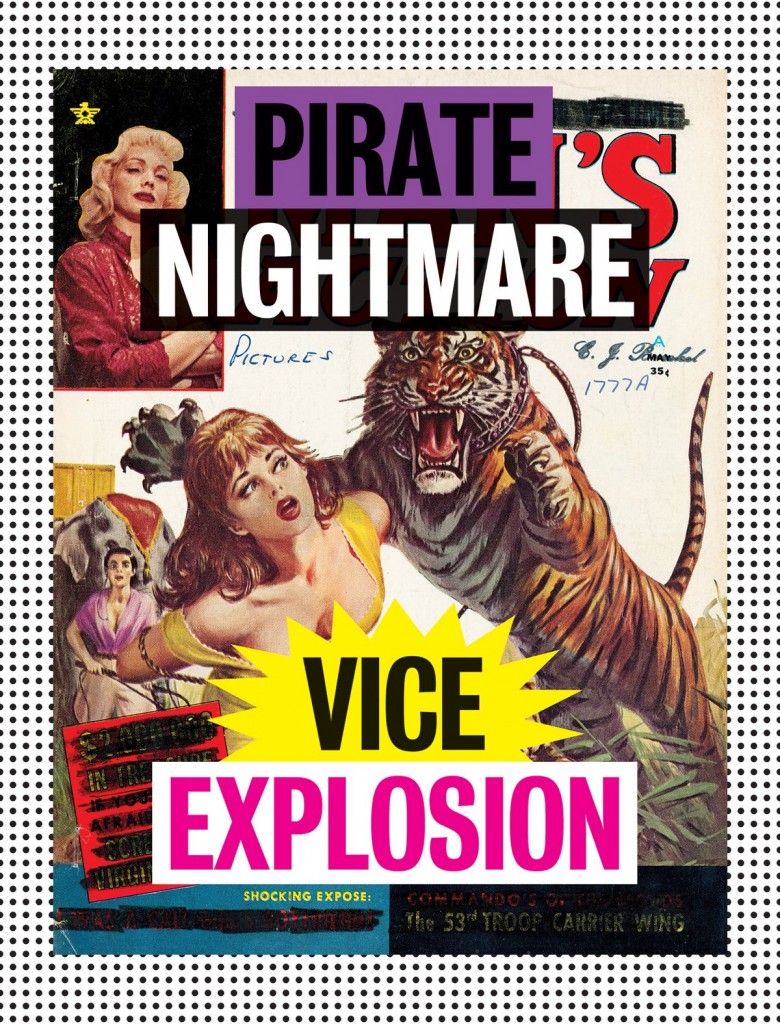 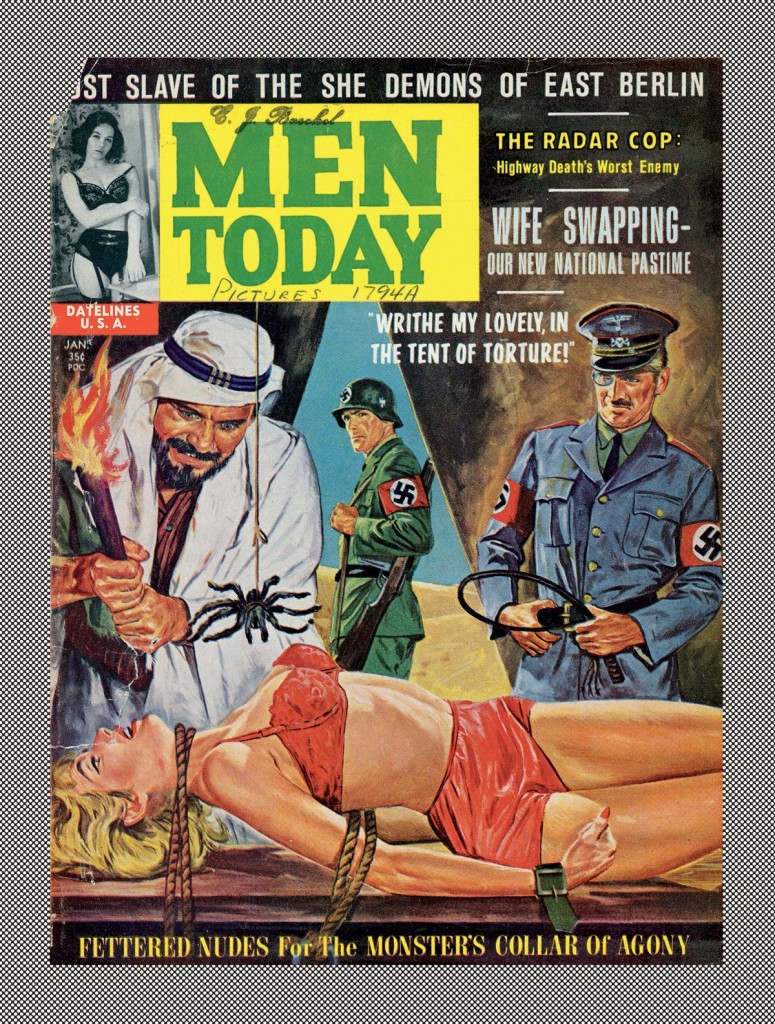 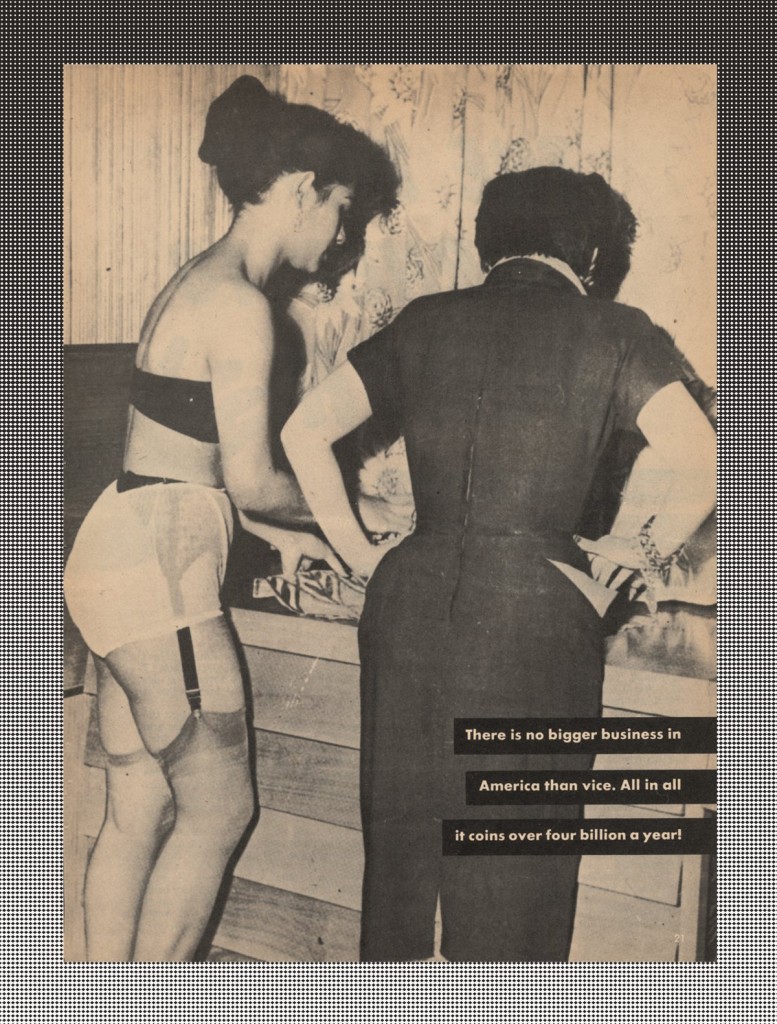 Pirate Nightmare Vice Explosion: Inherited Remnants of an Amateur Dadaist’s Library by Michael Kupperman (Four Corners Books) $40.00 – Comics artist Kupperman (Tales Designed to Thrizzle, Snake ‘n’ Bacon’s Cartoon) bought a stack of men’s magazines from the 1950s and 1960s where the previous owner did some weirdo modifications. Now he’s sharing it with you, FOUND Magazine-style. “They all had the owner’s name stamped on them,” Kupperman observed, “but the stamp is slightly illegible, so it’s impossible to know if the name is C. Buechtel, C. Brockel, C. Buschol or some other variant. This man–I’m assuming it was a man–spent years acquiring lurid men’s magazines and taking them apart, using the contents to form his own hybrid magazines with the pages from several reassembled inside the cover of one. With a grease pencil he’d cross out the headlines on the covers that didn’t apply anymore, and stamp his name on the results, along with a number. Why was he doing this? It’s not clear. It might have been a need to make the magazines seem like a serious collection, his re-editing emphasizing his sober interest in subjects such as modern fiction and wife-swapping.

Zines
Coptic Book Binding by Grace Dobush $4.00
When Sex is a War by Nola Weber $5.00
Memento Mori Night Air $2.00
Worth of Water: A Compzine About Self Care by Sarah Rose $4.00
Education, Memory, Solidarity, The Effect of Advancements in Music Delivery and Sharing on the Role of 20th and 21st Century American Protest Music by Dave Anians $4.00
How to Tell Someone to Sod Off: A Not Helpful Guide by Georgi $.75
Guide to Dating Gangsters vol 2 (Vice Versa Press) $3.00
Hot Pantz: A Do-It-Yourself Gynocology, Herbal Remedies by Isabelle Gauthier $4.00 – Trasnlasted from the original French.
Black Dog Goes for a Walk #1 Spr 14 Meeting the Black Dog – Our Journey Through Depression and Anxiety by Kat Knead $3.00 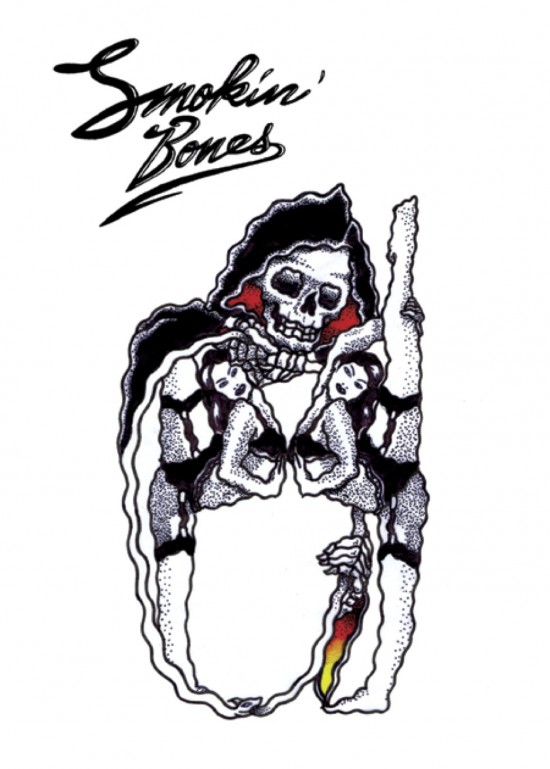 Graphic Novels & Trade Paperbacks
Pretty Deadly vol 1 the Shrike by Deconnick et al. (Image) $9.99
God is Dead vol 1 by Jonathan Hickman et al. (Avatar) $19.99 – When the gods of old begin to reappear on earth and claim the domain of man for their own, the world is thrown into a state of utter anarchy. Now Horus walks the streets of Egypt, Zeus has taken over the Sistine Chapel, and Odin is coordinating the dissection of the earth among the returned deities. Who rules who now?
Hellboy in Hell vol 1 The Descent by Mike Mignola et al. (Dark Horse) $17.99
The Amateurs by Conor Stechshulte (Fantagraphics) $14.99
Authority TPB vol 1 by Warren Ellis et al $19.99
Strange Fruit, Volume I: Uncelebrated Narratives from Black History by Joel Christian Gill and Henry Louis Gates Jr. (Fulcrum Publishing) $23.95\
The Art Of Neil Gaiman by Hayley Campbell $39.99
Safari Honeymoon by Jesse Jacobs (Koyama Press) $15.00 – Join a pair of young newlyweds as they descend deep into a mysterious forest, encountering unknown creatures and unimaginable landscapes. Amongst the unusual flora and fauna, they discover within themselves something more strange and terrible than any sight their safari has to offer. 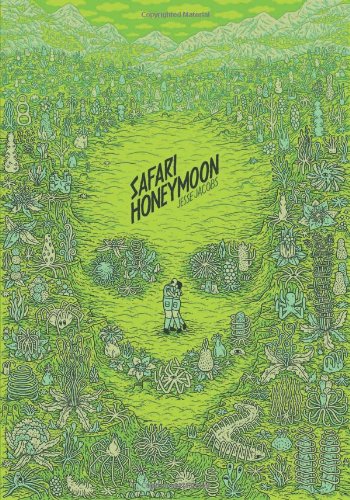 Music
Simon Barker: Punk’s Dead by Michael Bracewell et al. $45.00 – From 1976 to 1978, the young photographer Simon Barker was a member of the “Bromley Contingent”–a group of avid Sex Pistols fans who comprised the group’s inner circle at the height of the punk movement. Many of them, such as Jordan and Siouxsie Sioux, were notorious for their daredevil dress sense, and several–such as Sioux, Steven Severin, Adam Ant, Poly Styrene, Billy Idol, Viv Albertine and Ari Up–went on to form some of the most important bands of the era. This compilation of previously unseen photographs by Barker shows these founders of punk in their earliest incarnations–in bedrooms and kitchens, at public gigs and private parties–before media and commerce sunk their claws into punk’s iconoclastic look and class politics. 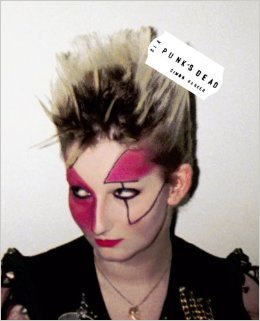 Politics & Revolution
Signs and Machines: Capitalism and the Production of Subjectivity by Maurizio Lazzarato (Semiotexte) $17.95

Fiction
Caveworld by Adam Gnade (Pioneers) $13.00
Where Do You Run by Michael O’Flaherty $14.95
3 books from Yuriy Tarnawsky’s Placebo Effect Trilogy: View of Delft, Like Blood In Water, Future of Giraffes ($18.00 each) 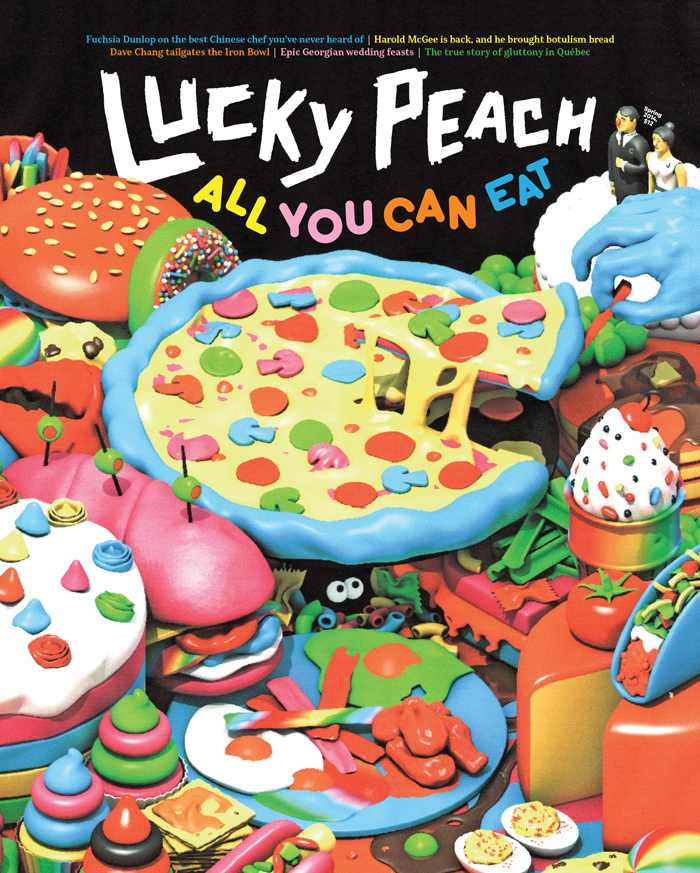 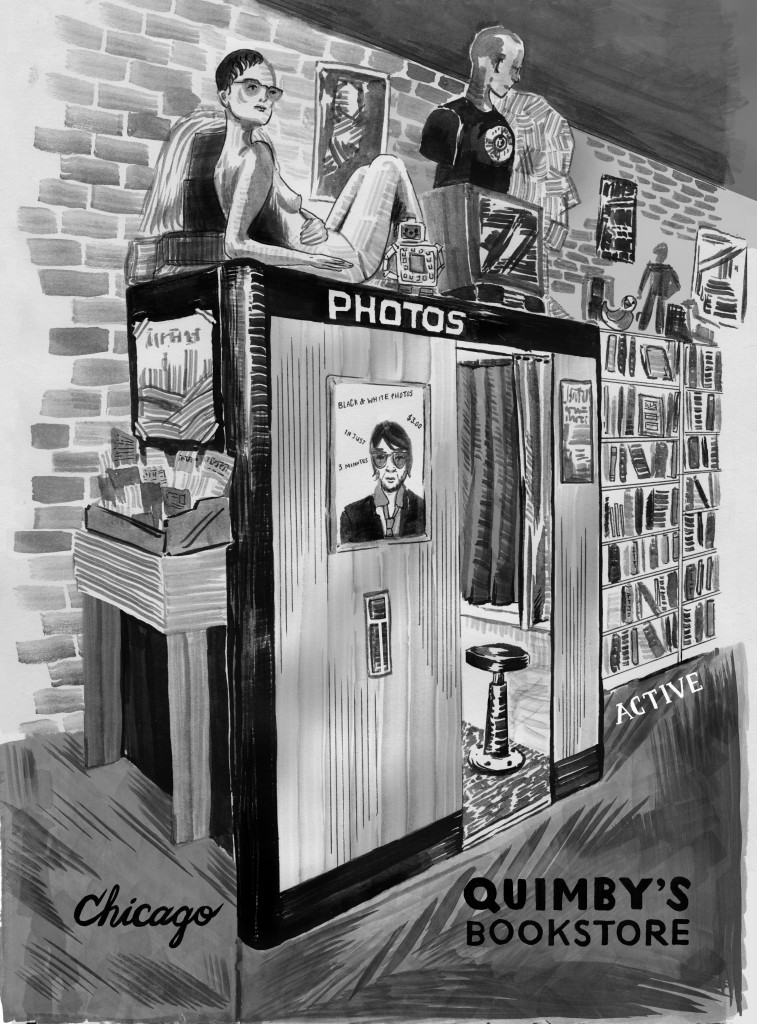 Come join Meags as she presents her work and discusses the process of making the definitive graphic novel about this fascinating subject.

For almost a century chemical photobooths have occupied public spaces, giving people the opportunity to quickly take inexpensive, quality photos. In the last decade these machines have started to rapidly disappear, causing an eclectic group of in- dividuals from around the world to come together and respond. Illustrator, writer and long-time photobooth lover, Meags Fitzger- ald has chronicled the photobooth’s fortuitous history and the events which gave rise to the desperate need to save them. Having traveled in North America, Europe and Australia, she’s constructed a biography of the booth through the eyes of technicians, owners, collectors, artists and fanatics. In this ground-breaking book Fitzgerald struggles with her own relationship to these fleeting machines, while looking to the future.
Meags Fitzgerald is an artist and storyteller who draws, animates, writes and performs. Working primarily as an illustrator, she has a BFA from the Alberta College of Art + Design and a certificate in Design from the Nova Scotia College of Art + Design University. In many of her works, Fitzgerald addresses memory, history and the act of collecting. Photobooth: A Biography is her first graphic novel.
For more information: 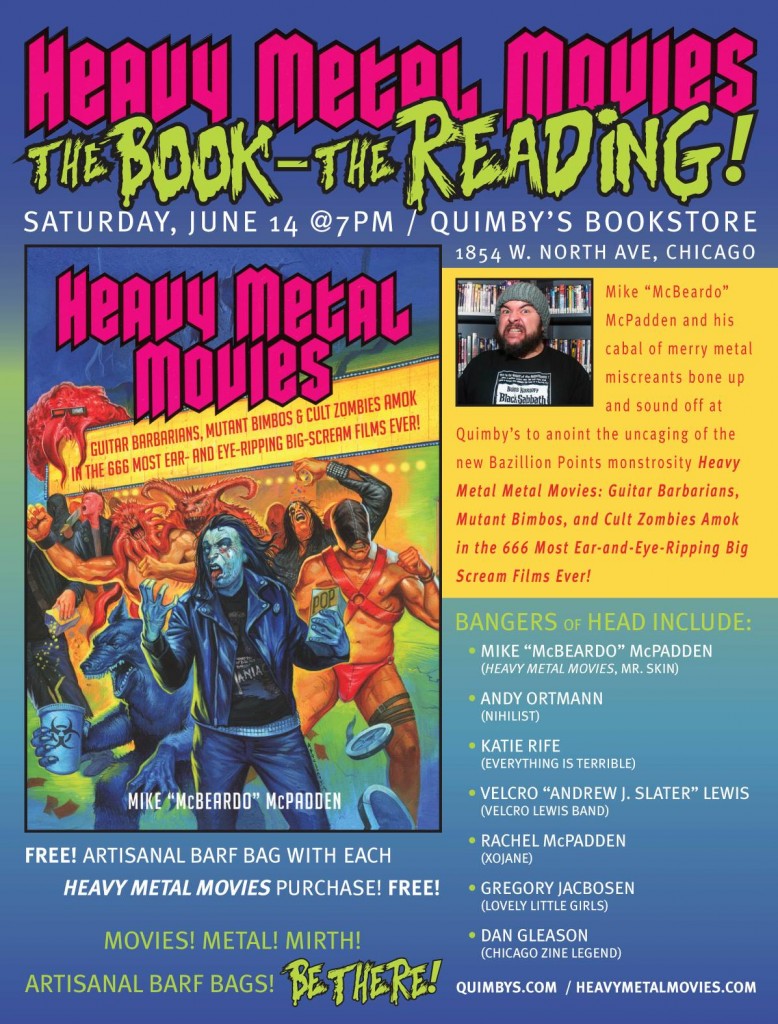 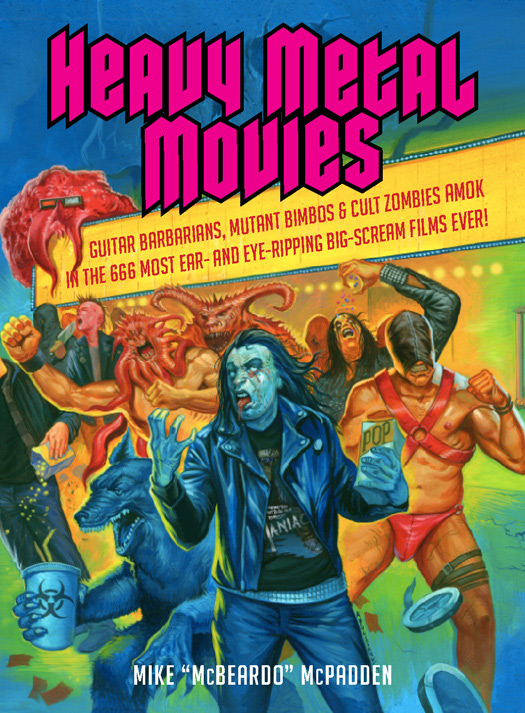