For folks who want to help transform our world into a better place for everyone, zines are a dynamic tool for sharing information, resources, and inspiration. This month at Zine Club Chicago Online: People Have the Power Edition, we’ll be discussing self-published works focused on the many ways we can all support radical change in the name of justice, equality, and peace. July is International Zine Month, and we can’t think of a better way to celebrate it than by focusing on this important topic. The suggested activity for #IZM2020 July 28th is about using social media to get the word out about your favorite zines, so grab your favorite titles, BYOS(nacks), and join us on Zoom for a great conversation!

Use #IZM2020 when writing online about International Zine Month. 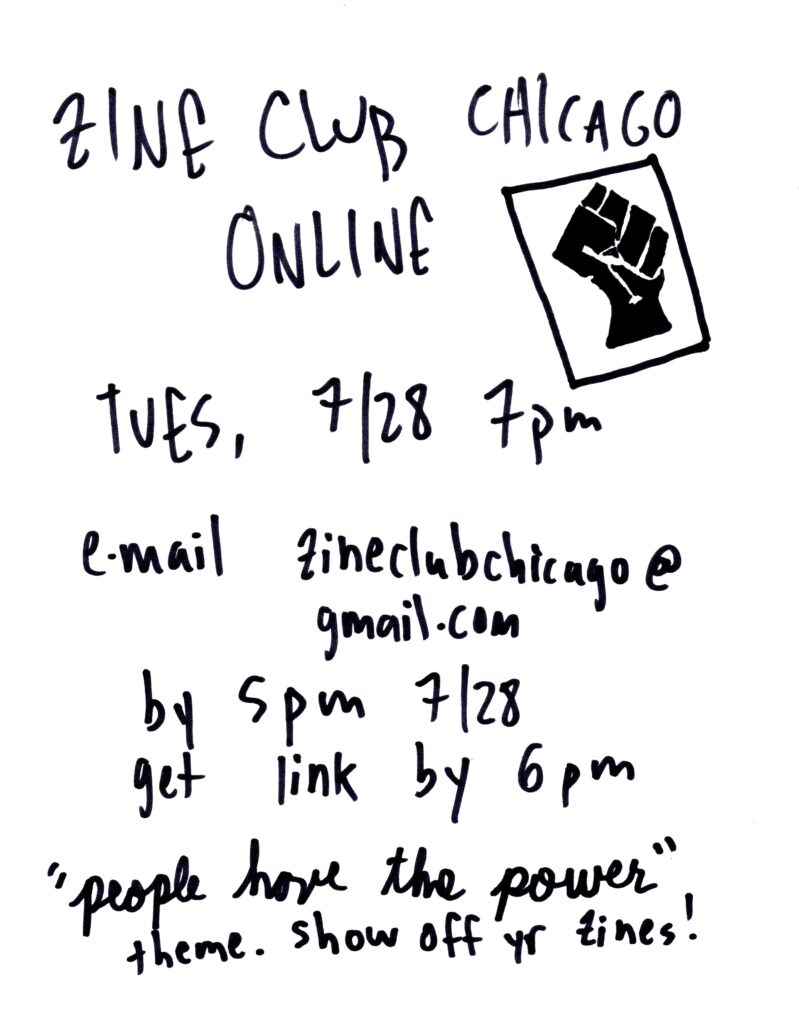 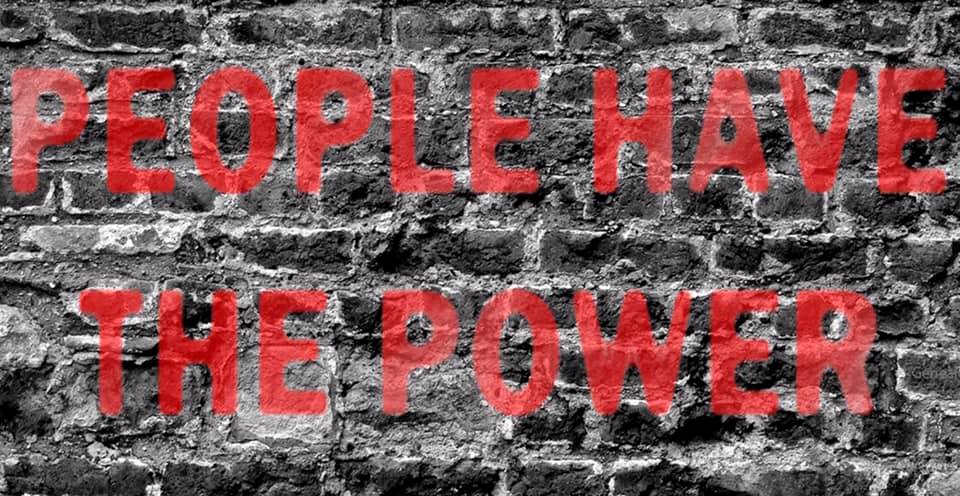 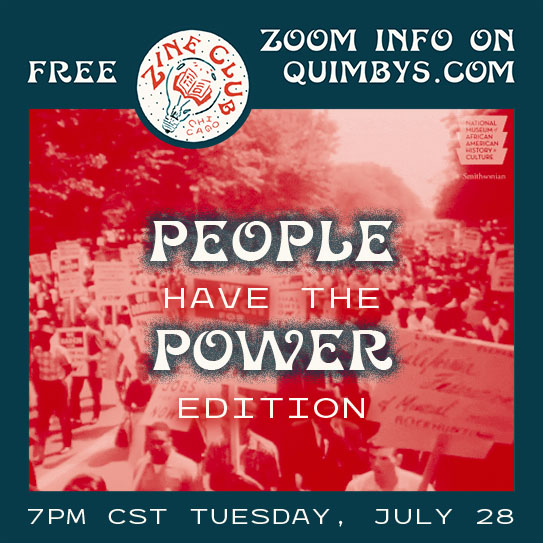 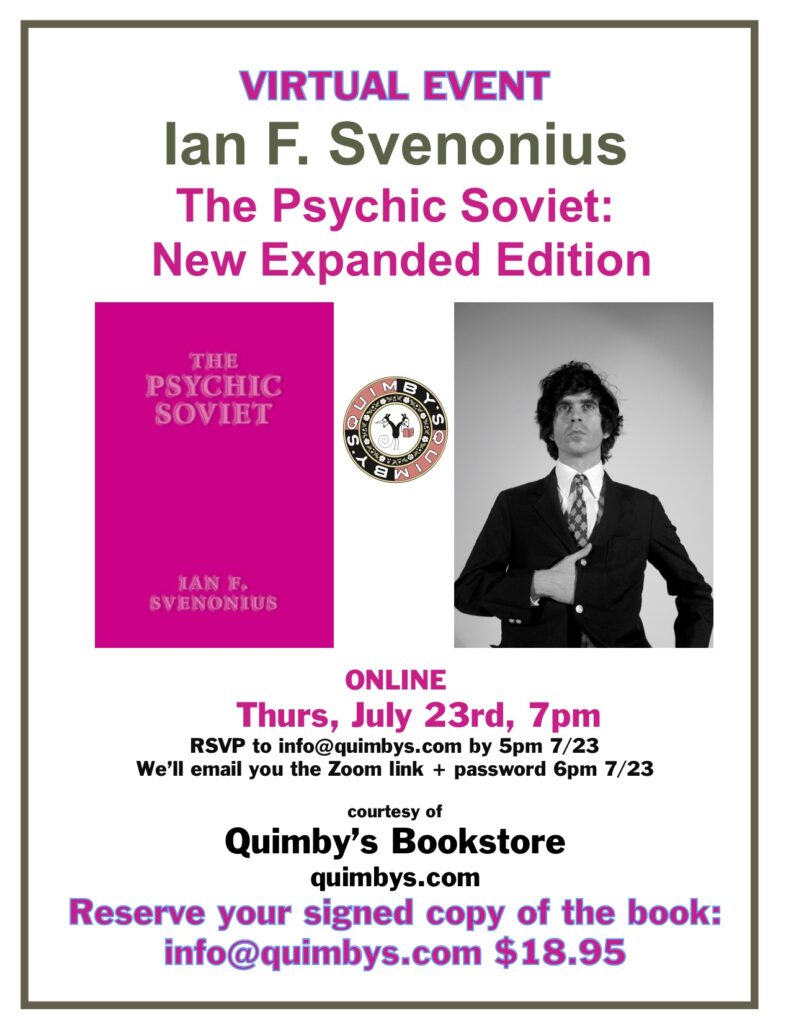 ABOUT THE PSYCHIC SOVIET
A new, expanded collection of essays and articles from one of the mainstays of the Washington, DC, underground rock and roll scene, The Psychic Soviet is Ian F. Svenonius’s groundbreaking first book of writings. The selections are written in a lettered yet engaging style, filled with parody and biting humor that subvert capitalist culture, and cover such topics as the ascent of the DJ as a star, the “cosmic depression” that followed the defeat of the USSR, how Seinfeld caused the bankruptcy of modern pop culture, and the status of rock and roll as a religion. The pocket-sized book is bound with a durable bright-pink plastic cover, recalling the aesthetics of Mao’s Little Red Book, and perfect for carrying into the fray of street battle, classroom, or lunch-counter argument. 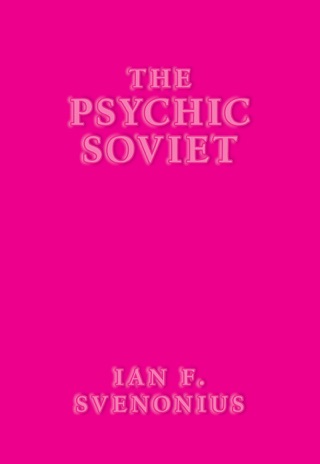 Quimby’s has limited SIGNED copies of this new edition of The Psychic Soviet. Purchase yours here at quimbys.com.

Ian Svenonius will be in conversation with musician Matt Sweeney for this event.

Matt Sweeney is a rock guitarist, songwriter, and producer. His work can be heard on albums by Adele, Current 93, Johnny Cash, Endless Boogie, Neil Diamond, Superwolf, and Chavez. He saw Nation of Ulysses perform back when Ian Svenonius would play with his shoes on fire. 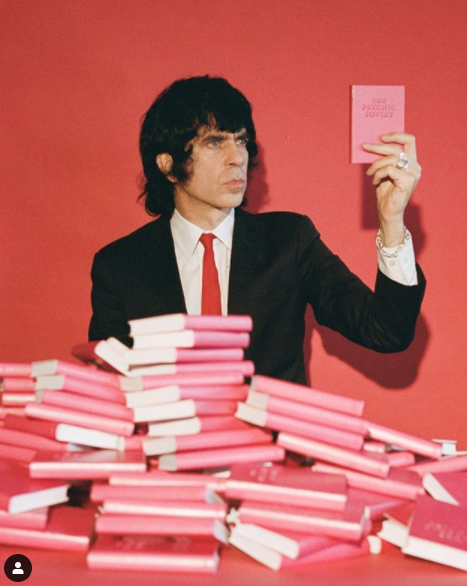 “In a sense the book is Mr. Svenonius’s love letter to the good old days of do-it-yourself punk concerts, though it’s cleverly disguised as a series of Marxian essays.”

“The pocket-sized book—given Svenonius’s communism infatuation, the parallel to Mao’s Little Red Book is no mistake—contains well-thought-out arguments on a variety of subjects, from vampires to the origins of punk rock. It’s often funny, but never in a self-consciously ironic way.”

“Ian Svenonius has come a long way since Sassy Magazine first dubbed him the ‘Sassiest Boy in America’ in 1991. The DC singer has never been anything less than political to the extreme.”

I’ve Worn All the Shirts In the Drawer: 64 Days of T-Shirts During COVID-19 by AJ Michael $5

Shit Talk: What Happens After It Goes Down the Drain by Nick Kawa $3.95
It’s Going to be Anarchy: Anarchist Analyses of the Coronavirus Pandemic by Jim Donaghey $4.95
Essential Oils to Destroy the Patriarchy: Remedies Formulated for Modern Women (& 1000-Year-Old Witches) by Eryn Nicole O’Neal $4.95
Speaking of Trains: A Glossary of Modern-Day Hobo and Railroad Worker Slang by Brakeshoe $7.95
What the Ladies Have to Say: Activists in Palestine, Indonesia, and the Philippines $3.95
Wherever We May Roam: Tour Stories & Other Tales by Greg Simmons $6
Anarchist Survival Guide for Understanding Gestapo Swine Interrogation Mind Games: Stay Free by Shutting the Fuck Up! by Harold H. Thompson $2.95
Against Prisons by Catherine Baker $2.95
Queer Attachment: An Anti-Oppression Toolkit for Relational Healing by Fizz Perkal and Leah Jo Carnine $5.95
My Personal History of Race: Parts 1 + 2 by Lauren Hage $4-$6
Obsessed with Bass: The Essential History of Miami Bass, 1985-1993 by Aaron Nemec $4.95
Bread of the Resistance by Tessalyn Morrison $9.95

The Witch’s Book of Shadows: The Craft, Lore & Magick of the Witch’s Grimoire (The Witch’s Tools Series) by Jason Mankey $15.99

The Devil’s Dozen: Thirteen Craft Rites of the Old One by Gemma Gary $16.99

The Sacred Art of Brujeria: A Path of Healing & Magic by Katrina Rasbold $17.99

Wake, Bake & Meditate: Take Your Spiritual Practice to a Higher Level with Cannabis by Kerri Connor $17.99

The Gamesmaster: My Life in the ’80s Geek Culture Trenches with G.I. Joe, Dungeons & Dragons, and The Transformers by by Flint Dille (Rare Bird) $27 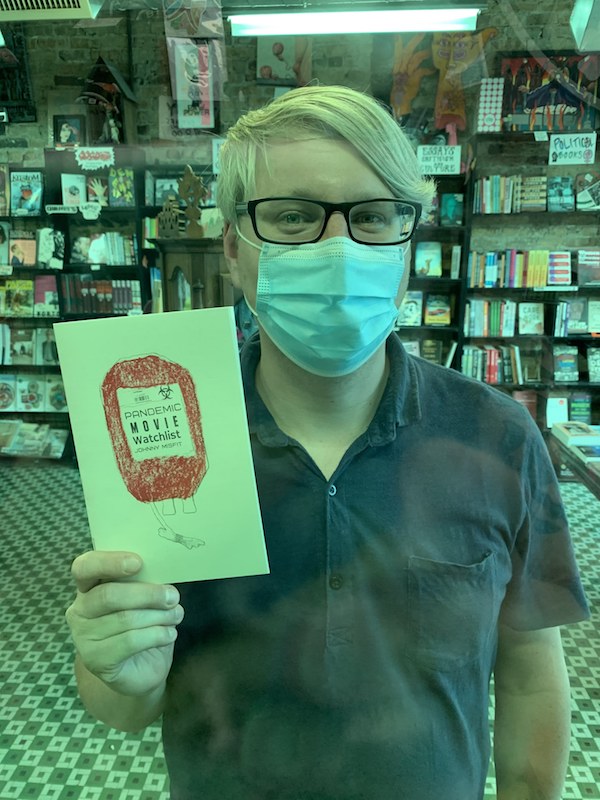 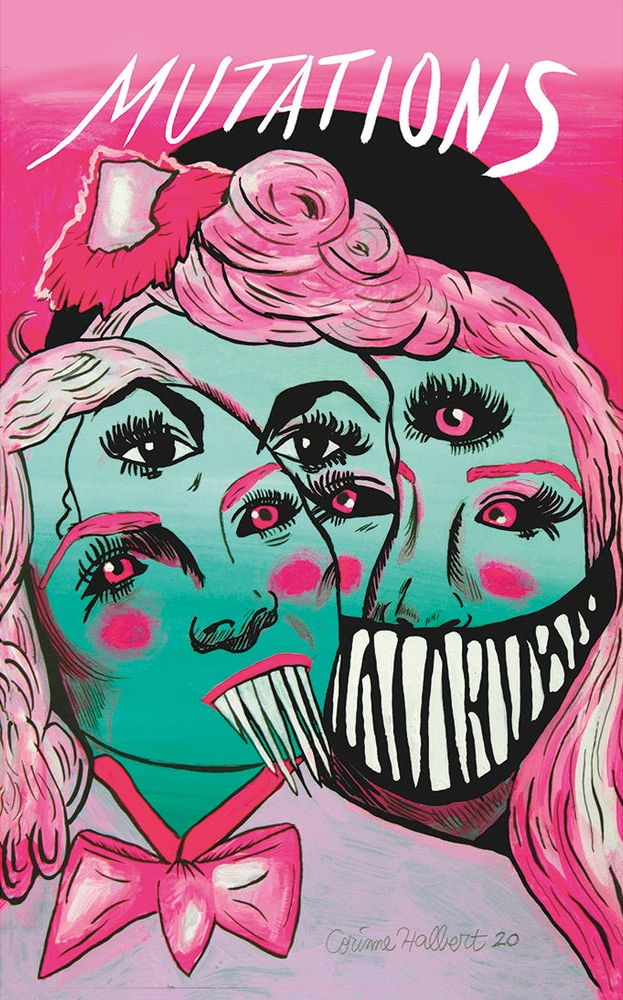 Wendy, Master of Art by Walter Scott (Drawn and Quarterly) $24.95

Nobody Left: Conversations with Famous Radicals, Progressives and Cultural Icons about the End of Dissent, Revolution and Liberalism in America by Fish (Fantagraphics) $24.99

Streets of Paris, Streets of Murder: The Complete Graphic Noir of Manchette and Tardi (Fantagraphics) $29.99

Perramus: The City and Oblivion by Alberto Breccia and Juan Sasturain (Fantagraphics) $49.99

Antarctica and the Secret Space Program: From WWII to the Current Space Race by David Hatcher Childress (Adventures Unlimited) $22

Sigh, Gone: A Misfit’s Memoir of Great Books, Punk Rock, and the Fight to Fit In by Phuc Tran $27.99

We live-streamed some new stuff this morning so people could see stuff and then come in and get it — because now it’s Day 3 of us being open. Wanna order the zine pack we talk about in it? It’s this.

Ode to My IUD by Heather Andhercats $3

Dancing After TEN by Vivian Chong and Georgia Webber (Fantagraphics) $24.99

Windows On the World by by Robert Mailer Anderson, Zack Anderson and Jon Sack (Fantagraphics) $24.99

The Progressive june / july What Comes Next $5.95